The Microsoft Surface Duo was revealed a year ago as the long-requested Microsoft Android phone. The device took a year to be released in the market and not it is finally available for pre-order. But be prepared for a whopping $1,400 price tag. Interestingly enough, the dual-screen phone came a little earlier than its expected “Holidays 2020” schedule. Perhaps, Microsoft couldn’t hold it for more months to not hurt sales, especially after the launch of the Snapdragon 865 Plus chipset. Microsoft Surface Duo is an expensive flagship but comes with last year’s Snapdragon 855.

Of course, anyone picking this device will pick it due to the Microsoft Software goodies and the Dual-screen experience. The handset comes with two identical OLED screens with 5.6-inch and a hinge that folds in a notebook style. We’ve seen the device a lot of times, but now, CNET got an exclusive in-depth look at the internals via a good old teardown. Through the images, we can see where Microsoft fitted all the money necessary to make the latest piece of foldable technology. 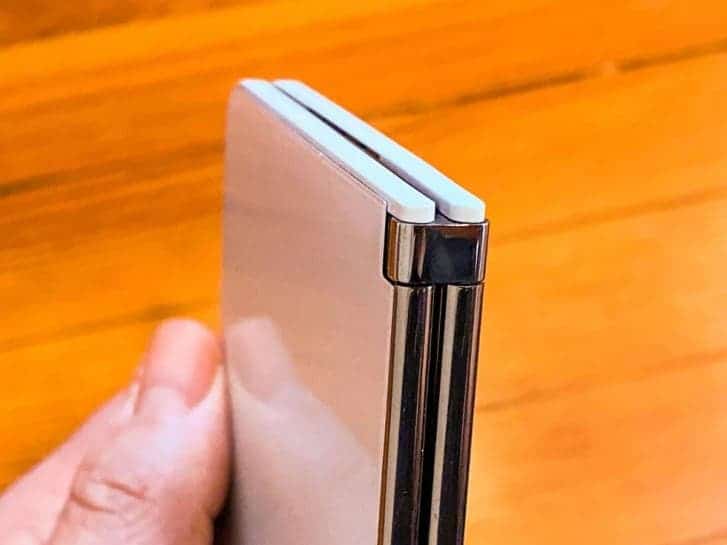 Worth noting that while we call this “Microsoft’s Foldable Phone” it’s not a foldable device at all. It features a hinge with a design that can be found in traditional laptops. The Surface Duo avoids all the complexities with these foldable displays but manages to deliver a true extended display experience with a good level of portability. 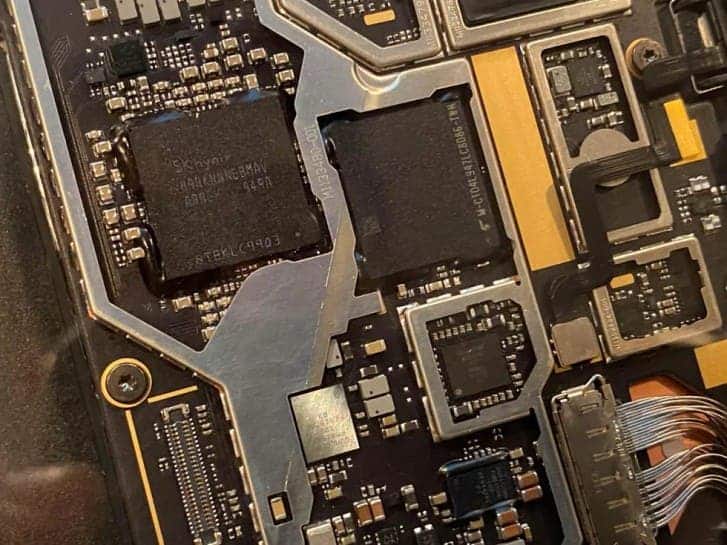 As aforementioned, the design of the Microsoft Surface Duo was pretty much done by its announcement. For that reason, Microsoft had to drive all the way the Snapdragon 855 SoC. However, it’s not bad at all, since this chipset only loses for the Snapdragon 855+, SD865 and SD865+. All of them premium chipsets. Microsoft also added chips to handle some of the extra features available on the device. Things like the Surface Pen Stylus and the Split Battery are handled by these chips. 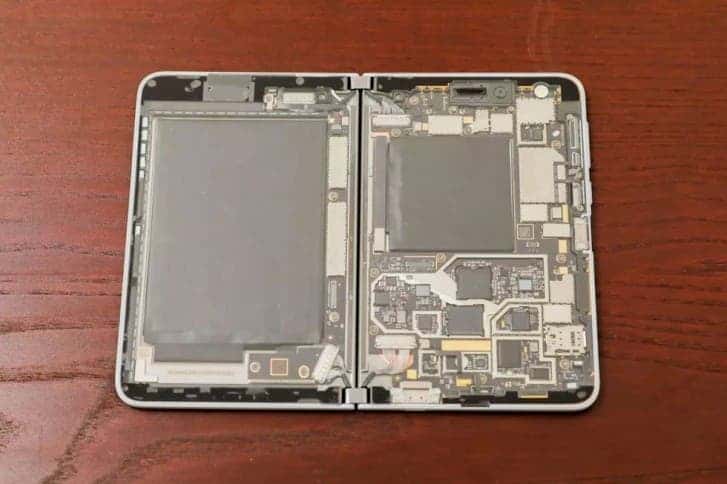 Two batteries inside, but they won’t match nowadays standards

The Microsoft Surface Duos has a two-battery system. On the left side, we have a big cell, while there is a very small one on the right. We have to say that the left cell looks massive, but don’t let your eyes betray you, the battery is super thin. When combined, both batteries deliver a 3,577mAh capacity which is below nowadays standards. We have to test it, but we’re sure that this battery isn’t enough to drive two displays for an entire day. There is a custom chip that ensures that the system will charge and drain both batteries at the same pace.

As we can conclude, Microsoft isn’t really concerned with the hardware offered. The proposal here is to deliver a solid device with a big focus on multitasking experience. Each side is 4.8mm thick, so even when folded the Duos isn’t very thick. 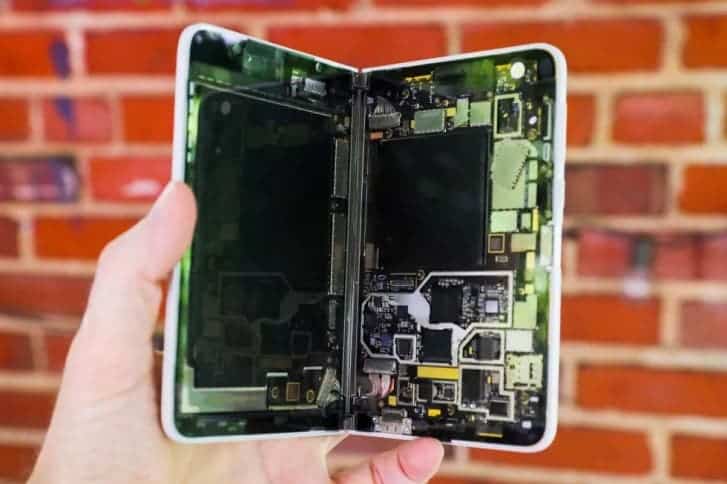 We have two identical 5.6-inch OLED displays (4:3) side by side. Users will be able to move information between in house apps just as easily they can do on Windows. The big difference is that the Duo runs Android with some in-house apps such as Microsoft Word, OneNote, Outlook and etc. While the experience may be rather limited now, Google is working to ensure that all its apps will support Duo’s side-by-side multitasking. Moreover, Microsoft will open its APIs allowing third-party developers to ensure compatibility with the Duo.

As you might know, the phone only supports the 4G network. It’s a limitation that you’ll have to deal with, and perhaps it’s the biggest downside for markets where 5G is operating fully. This may not be the end for 5G supporters, as Microsoft may release an upgraded Duos in the future with support for the fifth-gen network.

In the end, we can conclude that Surface Duos isn’t a device for everyone. A niche device is the best way to describe it. However, having success with it is vital for Microsoft. A failure would condemn future smartphones from the software king.

Previous Huawei: Our existing phones will still get Android and GMS updates

Next Gionee Max arriving on August 25 in India