HP has unveiled a new notebook in China dubbed HP War X. This is a special laptop edition featuring a Ryzen processor and inspired by the Star Wars Animation. Moreover, it’s available in several screen sizes with 13-inch, 14-inch, and even 15-inch. Interestingly enough, it marks the comeback of Star Wars-inspired HP laptops.

Back in 2015, HP introduced the first Wars Edition of its laptop. This time around, the company equipped the laptop with one of the best chipsets in the industry right now. That’s the AMD Ryzen 7 Pro – 4750U chipset that is giving power to the notebook. Worth noting that the Ryzen lineup is quite popular and not very common in laptops, so it certainly will count as an advantage for HP. Technology enthusiasts and fans of powerful hardware will certainly take the HP War X Ryzen Edition as one of the possible choices in the market. The 4750U integrates all eight core featuring Zen 2 microarchitecture. They are operating at 1.7GHz to 4.1 GHz (Turbo) with SMT / Hyperthreading support (16 threads). The chip boasts a modern 7 nm process at TSMC and partly thanks to it AMD advertises a 2x improved performance per Watt for the Renoir chips.

The company is also offering a slightly cheaper variant with the Ryzen 5 Pro 4650U chipset. This lesser variant is available for all three sizes. However, the bigger variant offers higher speeds, extra memory, and wider bandwidth. It’s also available in different resolutions starting in 1080p to 4K UHD. Moreover, it has 16GB of RAM and 512GB of Internal Storage. Worth noting that the new laptop also features the world’s first PCIe 4.0 connectivity. It’s a great technology for the most advanced motherboards offering support. The new laptop features an all-metal body with the display and the panel is quite bright. It offers up to 400 nit brightness and a whopping 100% SRG color gamut. The device is quite lightweight with just 1.69 kg. 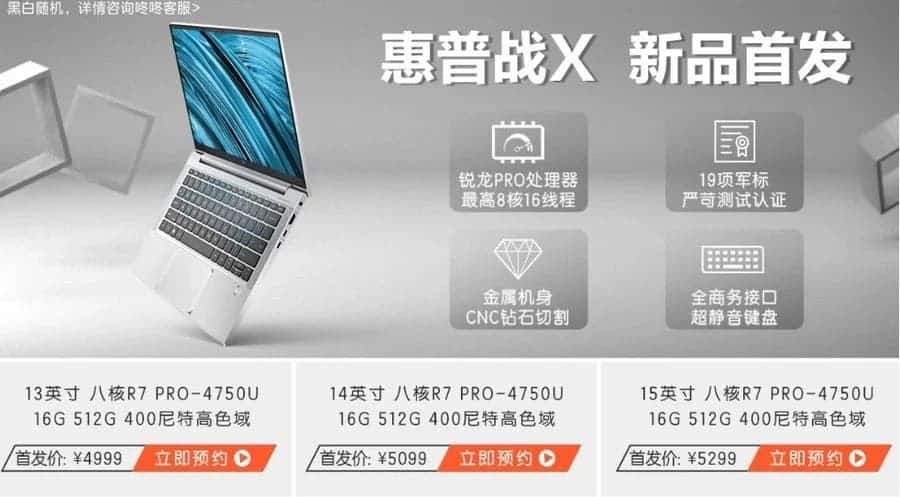 As for the prices, the HP War X product comes with a starting price of RMB 4,999 which is just around $722 for the 13-inch variant. Moreover, there is a 14-inch model that costs RMB 5,099, or $736. A third option is a 15-inch unit, but it will set you back RMB 5,299, just over $765. The new laptop will be sold at Jingdong and will be available starting on August 31. We’ll update this post we more info when Jingdong updates the listing with more specifications.

It’s a powerful laptop that certainly will attract a lot of attention in China. Hopefully, HP will not make it exclusive to the Chinese market will bring it to more regions pretty soon.

Previous Huawei Mate 8 is getting a new software update

Next Huawei Enjoy 20 Plus renders reveal the camera's island design