Apart from all the ban concerns, Huawei is busy with the imminent reveal of its Huawei Mate 40 series. The new smartphones will be the last scream of Kirin’s chipset division featuring the highly-anticipated Kirin 1000 chipsets. The company managed to become of the most important flagship makers in the market but now everything about its smartphone division’s future is surrounded by concern. Meanwhile, the company is rolling out an update for a device that was released in the second half of 2015 – The Huawei Mate 8.

The Huawei Mate 8 was the company’s flagship to compete with the likes of iPhone 6s, Galaxy 6 and Galaxy Note 5. Five years have passed since its debut and the company decided to roll out a new update. This is very uncommon in the world of Android updates when companies tend to drop devices after two years. Interestingly enough, out of all devices released in 2015, Apple iPhone 6s and 6s Plus are the only devices to get regular software updates. In fact, both devices are still eligible for iOS 14. Is easier for Apple to keep supporting its smartphones. After all, the company controls the software and the hardware and release just a couple of devices every year. Android is here with all the fragmentation and myriad of custom skins. The update adds July Security patch and a new feature

All of sudden, Huawei is rolling out a new system update for the Huawei Mate 8. The new OTA release carries an 8.0.0.850 (Coo) build number in China. It’s probably the first time a five-year-old Android smartphone gets an Official Software update from the company. It’s not a standard for Huawei, so it’s the first time we see a 5-year-old flagship getting an update from the company. However, don’t think that this is an update to EMUI 10. The device is not eligible for that update, unfortunately. It’s an updated base on the EMUI 8.0, the last firmware available for the handset. The device was released with EMUI 4.0 based on Android 6.0 Marshmallow and received two major Android updates. 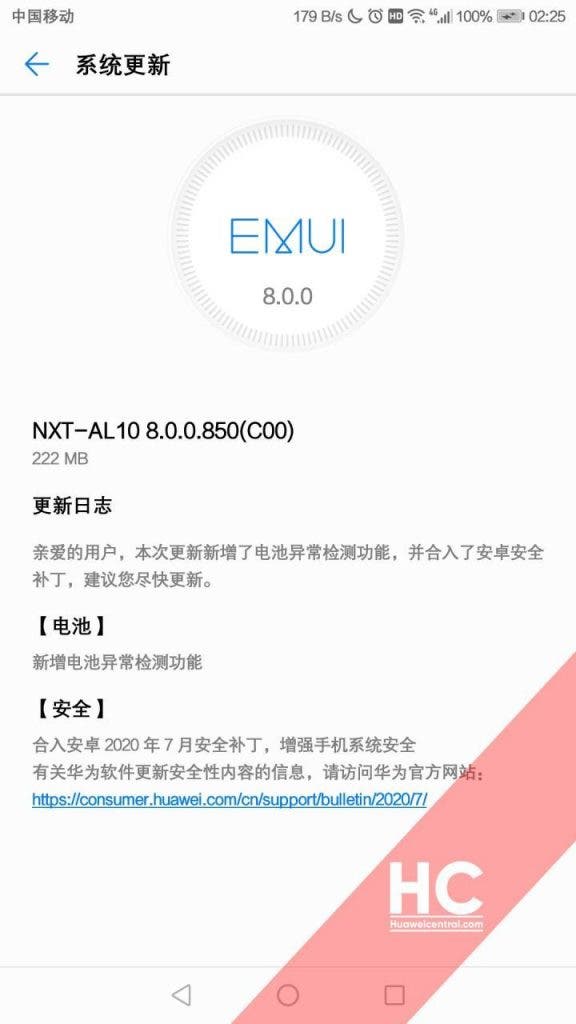 Curiously, the new update brings the security patch level to July 2020. Moreover, it adds the “Smart Charge” feature, which reduces battery aging by adapting and preventing the battery from being continuously charged when full. It’s a bit strange to see this update coming right now. After all, any 2015 Huawei Mate 8 laying around probably has a very old battery inside.

The OTA update comes with 222MB in size and is only available in the Chinese variant of the smartphone. However, we can expect it to reach global units in the coming days. Worth noting that a similar update rolled out to Huawei Mate 9 and Mate 9 Pro (2016), Huawei P9 series, and P10 series from 2017.

Previous Huawei CTO: 5G is cheaper because its capacity is 10,000 times that of 2G

Samsung pulls One UI 3.1 update for the Galaxy S20 FE