Huami’s Amazfit is one of the strongest names if you’re in the market for a smartwatch in 2020. The company has a very popular lineup of Amazfit smartwatches and is gearing up to unveil a new set of wearables in the next month. However, we believe that a major change is coming since the Amazfit companion app just got a renaming treatment on Google Play Store. 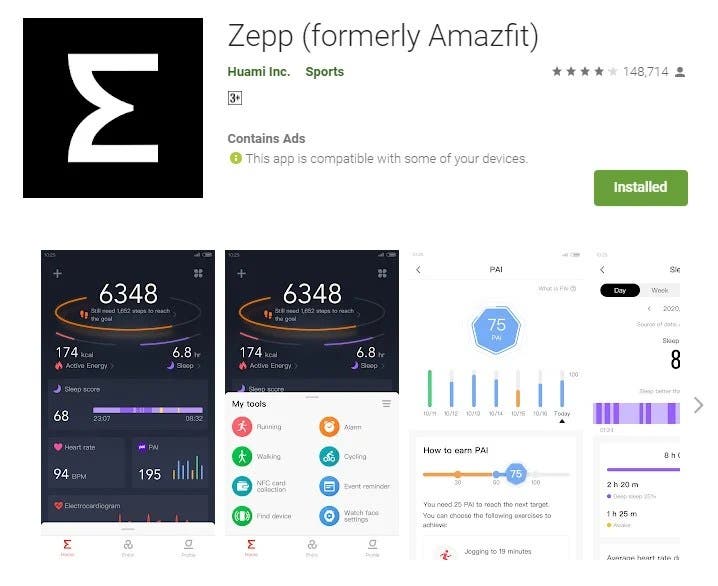 If you own an Amazfit smartwatch, you probably are familiar with the Amazfit companion. Well, the app now goes by Zepp (formerly Amazfit) which seems to be a pretty confusing development for the brand. Especially after establishing its name in the market. Thankfully, the app’s description provides a comprehensive explanation to justify this change.

According to the information provided, the decision is to bring a more comprehensive and professional health management experience to a wide audience. Moreover, it says the official renaming will be on August 25 and it will also include a new app icon. Huami assures users that Amazfit devices will continue to work as normal with the renamed and updated the app. However, this isn’t a surprise.

Interestingly enough, Zepp is a company known for making smart sport accessories and sensors. Upon investigation on the Play Store, we’ve been able to find several special Zepp apps made for the company’s sensors for sports. These apps usually cover sports like Tennis, Soccer, and Golf. Worth noting that developer behind theses apps Anhui Huami Information Technology Co. Ltd, following the acquisition two years ago.

Apparently, Huami is working to merge all the apps together in a unique Zepp application. We expect to see the new app working for both Zepp sensors and Amazfit products.

Huami recently published a teaser on Weibo revealing that new products will be revealed this Autumn. Among the list of upcoming devices, we expect the new Amazfit GTR 2 and GTS 2. Moreover, the company will introduce its first smart scale and even added support for the Amazfit (Now Zepp) app. So we believe that the change in the naming of the app isn’t just a mere coincidence. The company obviously is preparing the terrain for a bunch of new products and among them, we expect to see some surprises as well.

As aforementioned, the official renaming of the app will happen on August 25. Perhaps, we’ll have an official statement from Huami with more information.

Previous Google Camera 7.5 will no longer create a separate folder for each portrait photo