Two years ago, Realme has born as a Oppo sub-brand featuring budget smartphones. As you might know, Oppo always was a company that played in the premium mid-range to the flagship segment. With Realme, the company managed to launch some cost-effective devices and achieve some popularity in markets like India. However, Realme quickly become a giant and now it operates as a sister company. The “Realme-effect” also played a big role in Oppo’s strategies bringing a new philosophy for its products and better software support.

Nowadays, the brand is much more than just a smartphone maker. It is consolidating its presence in the market thanks to a wide range of products. The list currently includes products like smart wearables, smart TVs, and more. However, the Realme smartphones still use Oppo’s manufacturing prowess. For that reason, we can see both companies sharing technologies like VOOC / SuperVOOC – SuperDart and ColorOS that become Realme UI. The younger company is just getting a new software feature that represents a step to differentiate its software from Oppo’s ColorOS.

Realme is introducing a new feature called “Smooth Scrolling” under Lab settings to a number of its smartphones. The name is self-explanatory! This feature kind of makes the infinite scrolling way smoother. You’ll notice in apps like Facebook and Instagram. According to a quick comparison made by XDA-Developers, it’s easy to notice a more sensitive scrolling when this tweak is active. It may work even better on smartphones with a high refresh rate display. 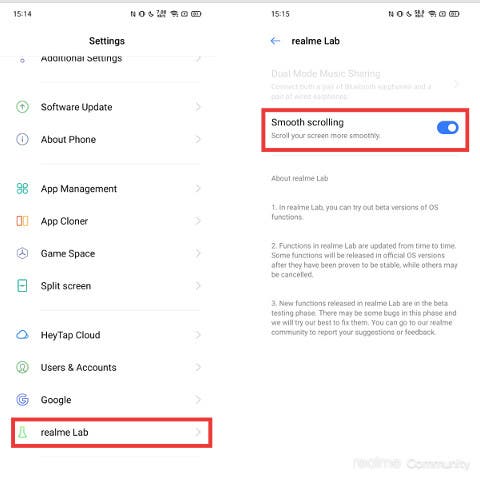 Worth noting that Realme achieved the title of one of the most reliable companies when it comes to providing software updates. Some smartphone makers don’t provide regular security patches for budget phones, but Realme has been an exception until now. This even when the company releases a bunch of smartphones. The company is one of the few firms providing constant updates, even though they can take some time to reach all units.

We are curious to see how the company’s software evolves. Of course, the next big step will be given in the form of Realme UI 2.0. It will be based on Google’s imminent Android 11 release. Hopefully, more features will be added to make it a unique software.

Previous Redmi 6 Pro is getting MIUI 12 update in India