After conquering the Indian customers, Realme has been working hard to establish its name in the International markets. The next step given by the company was made today with the release of the budget smartphone Realme C11 in Europe. The super-budget device comes with a 99 Euros price tag to several countries like Belgium, Germany, Luxembourg, Portugal, and the Netherlands.

To make things even more interesting, the company will be giving a free Realme Band for those purchasing the device in the next 48 hours. The Realme Band usually retails for 25 Euros which is a quarter of the phone’s price. It’s a great deal since it gets your phone and one of the first smart wearables made by Realme. Alternatively, you can get Realme Buds 2 for 10 Euros or Buds Wireless for 20 Euros. Students can get a further %5 discount.

The phone is available in both Mint Green and Pepper Gray.

Under the hood, the Realme C11 boasts a MediaTek Helio G35 chipset, which is an Octa-Core chipset with 8x Cortex-A53 cores. It may not be impressive as other chipsets running with Cortex-A75 or A76 cores. But it’s really good at this price point. Last year, most of the low-end phones were selling with Quad-Core chipsets. Now having an Octa-Core phone for the sub-$100 price tag is simply amazing.

Moreover, the C11 is more than just a phone with adequate performance for most applications. It’s a good device for media consumption since it boasts a 6.5-inch HD+ LCD display with a 5,000mAh battery and reverses charging support. The biggest downside is that there’s no fast-charging support since it ships with an ill-fated micro USB port. The battery will take some time to die thanks to the HD display and the 12nm chipset. However, it will also take several hours to charge. Another interesting point is that the fingerprint scanner is absent, so we don’t have biometric authentication here. 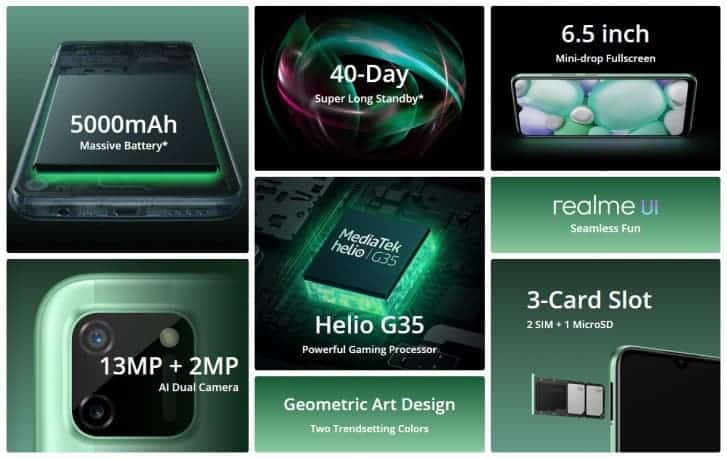 On the camera front, we start with a modest 5MP selfie shooter. This camera sits in the waterdrop notch of the handset and it’s enough for video calls and some modest selfies. Moving around to the back, we have the main camera with 13MP resolution. This shooter is joined by a 2MP depth unit. Despite its modest specifications, the software is fully packed with advanced features like Realme’s Nightscape mode. Worth noting that the C11 was the first Realme device to land on the rectangular camera terrain, a design aspect that has pretty much become mainstream during this year.

Realme C11 reached Malaysia in the end of June. The company moved it to India on July 14 and now it is finally reaching the European market.