Huawei is scheduled to hold HDC 2020 (Huawei Developer Conference) on September 10. In addition to Hongmeng 2.0, netizens are also looking forward to the Huawei EMUI 11 system. A few days ago, after inquiries, the Huawei P40 Pro (ELS-N04) is now upgraded to the EMUI 11.0 system. In addition, this smartphone also has Wi-Fi 6 certification from Wi-Fi Alliance. However, from the certification, we can see that the EMUI 11 system on the Huawei P40 Pro is on top of Android 10. 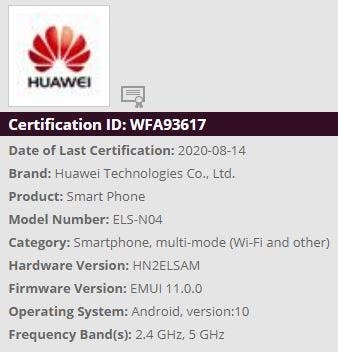 According to reports, Huawei has made significant changes in the EMUI 11 system. There are changes to its  AOD design, smart split-screen, and comprehensive system translation services. The overall experience is very good, the company claims.

In addition, the German IFA exhibition will open on September 3, and Huawei may take this opportunity to bring Kirin 9000 processors. While we wait for the Huawei Mate 40 series, here is what we can expect.

There will also be a Mate 40 Pro/Mate 40 Pro+ which should use a waterfall screen from LG Display and BOE. Just like the standard version, it also supports a 90Hz refresh rate and uses a 5nm Kirin 9000 processor. In terms of cameras, It will arrive with a 50MP sensor using Huawei’s liquid camera technology. Earlier reports believed that this feature will not appear until the Huawei P50 arrives next year. However, the company may not launch the P50 series.