Huawei is currently fighting for its survival in the smartphone market. However, this is not stopping the company from working on new products. According to Huawei Consumer Business CEO, Yu Chengdong, the company will release a wireless headset this year. Back in April, there were reports that Huawei’s upcoming headset will use its Kirin A1 chip. However, we now have some images of the Huawei wireless headset. 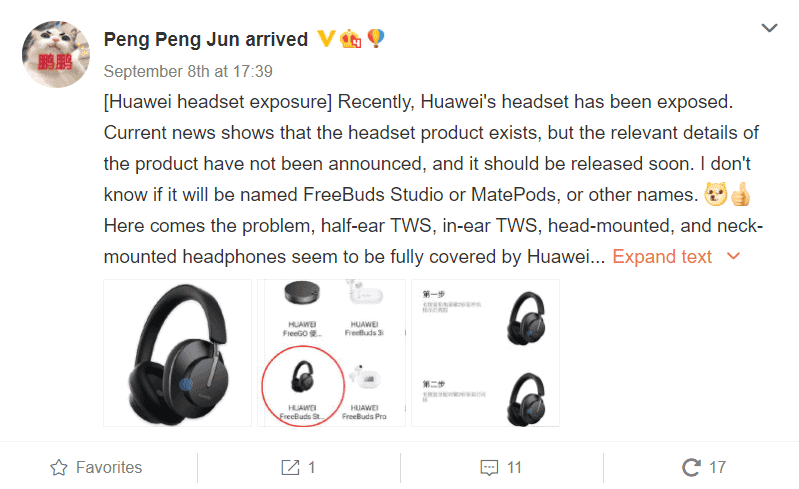 According to the leak from Weibo user (@鹏鹏君), the Huawei Wireless Headset exists and it will hit the market soon. The images show that this new device from Huawei uses a simple design. Unfortunately, these images are the only information we have about this device for now. There is no information on the specs of this device. However, the image on the Weibo page has the name “Huawei Freebuds Studio”. Whether or not this device will use the “Freebuds Studio” name remains unknown.

The Huawei Kirin A1 is the first wearable chip from Huawei that supports both wireless audio devices and smartwatches. This chip supports both Bluetooth 5.1 and Bluetooth low power 5.1 standards. It integrates a Bluetooth processing unit, an audio processing unit, an ultra-low power consumption application processor, and an independent high-efficiency power management unit. The Kirin A1 adopts the unique BT-UHD Ultra HD Bluetooth codec technology. It has a maximum transmission bandwidth of up to 6.5 Mbps, which greatly improves the transmission speed.

There are reports that Apple is also about to release its first headset AirPods Studio, which is a wireless noise-canceling headset, priced at $349.