LG had previously announced the LG Velvet back in this year packing in a Snapdragon 765G chipset. Lately, T-Mobile had announced that it will be bringing the LG Velvet 5G to the United States with a MediaTek Dimensity 1000C chipset instead of the Snapdragon 765G. Interestingly, the Velvet 5G with new chipset is spotted on Geekbench with 6GB of RAM. The phone scores a score of 601 in the single-core test and 2365 points in the multi-core test 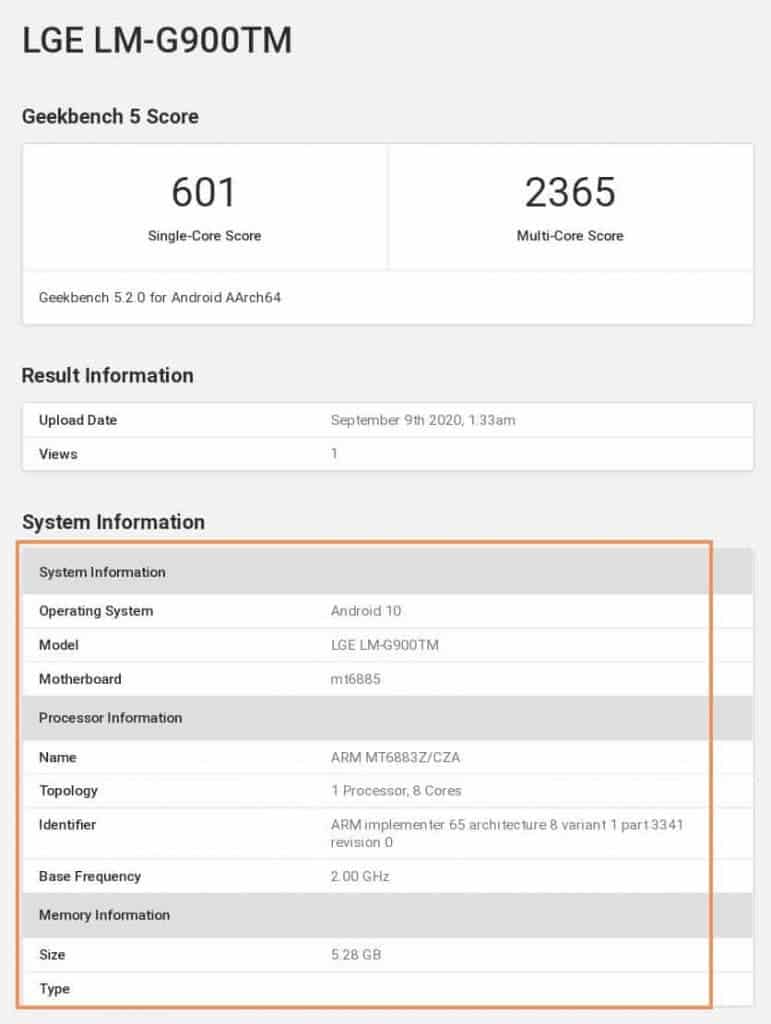 This time around, the LG Velvet will be sporting a chipset from MediaTek. According to Google Play Console, the phone will sport the MediaTek’s Dimensity 800 processor. This is a 7nm Octa-Core processor with an integrated modem for 5G connectivity. The chipset makes use of four Cortex-A76 cores clocked at 2.0GHz and four Cortex-A55 cores working at 2.0GHz rate. For graphical purposes, this system-on-chip comes with a Mali-G77 MC4 GPU. MediaTek also equipped it with HyperEngine gaming technology ensuring a smooth gaming experience. The listing also suggests that the processor is paired with the 6G of RAM. If you recall, the vanilla LG Velvet came with a sole 8GB of RAM option. The phone runs Android 10 OS straight out of the box with LG UX on top.

Apart from the chipset, the phone may retain the design and other specs of the Qualcomm variants. This will include the 6.9-inch P-OLED display with 2,460 x 1080 pixels of resolution and a 20.5:9 aspect ratio. The phone also comes with a waterdrop notch at the top housing a 16MP selfie snapper. The display offers support for stylus (Wacom) input with up to 4,096 pressure levels. Unfortunately, this display is of the 60Hz standard. The device has a well-designed raindrop triple-camera setup. It packs a 48MP primary camera, an 8MP ultra-wide sensor, and a 5MP depth shooter.

The Dimensity 800 variant would be cheaper than the Snapdragon 765G which currently starts at 650 Euros for the 8GB of RAM. That’s way too much for this chipset. In addition to the cheaper processor, we also expect to see 6GB RAM bringing the price to a lower point.

The biggest problem with the LG Velvet and its price is due to the fact that it uses a mid-range chipset. Of course, we’re not talking about a weak chipset, but the excellent Snapdragon 765G with a 5G integrated modem. However, it still is for mid-range devices, and the device cost as much as some flagship devices like the Redmi K30 Pro.

The processing power is combined with 8GB of RAM and 128GB of Storage. The specifications are built around a 6.8-inch OLED display with Full HD+ resolution and 20.5: 9 aspect ratio. The display has a waterdrop notch housing a 16MP selfie shooter and a fingerprint scanner underneath. Moving around to the back we have a triple-camera array featuring a raindrop design. This combo packs 48MP main + 8MP ultrawide + 5MP depth modules.

Next VIVO Watch Appeared In A Spy Photo, Showing A Few Variants