The Moto E7 Plus is nearing the corner and will come as Motorola’s top offering for the entry-level smartphone series. Back in the last month, a couple of renders surfaced revealing the handset along with key specifications. It was enough to give us a good idea of what to expect from the new affordable handset. However, today there is a new extensive leak that leaves just a little to the imagination. It reveals the full specifications and price for the upcoming handset. Moreover, it brings a couple of new press renders showing the device in all its glory.

The new Moto E7 Plus follows current guidelines and honors its “Plus” moniker with a 6.5-inch LCD. Unfortunately, it only has a 1600×720 resolution which may be a little low at this display’s size. The panel comes with a waterdrop notch at the top serving as a house for the 8MP selfie snapper. Moving around to the back, we have a Dual Camera setup comprising a 48MP primary with a 2MP depth sensor. The resolution of the main camera is quite high, but with just two cameras doesn’t expect many advanced features.

Under the hood, the new phone packs the Snapdragon 460 SoC which is an excellent evolution for Qualcomm’s low-end chipset series. The chipset is paired with 4GB of RAM and 64GB of storage. We’re not sure if there will be other variants, but the device also comes with a microSD card slot allowing you to further expand the base storage. 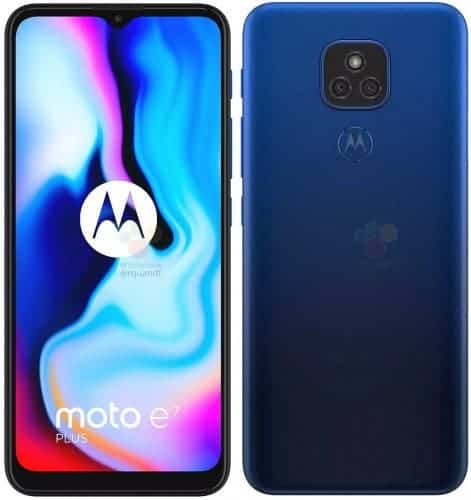 The phone has a power key and a volume rocker on the right side along with a third key that probably is a dedicated Google Assistant button. The phone will weigh 200 grams thanks to its massive 5,000mAh battery. Unfortunately, it ships with a micro USB port that can only provide up to 10W of charging. In other words, it will take more than 2 hours to completely charge this battery.

Apparently, there is a fingerprint scanner ou the back doubling as Motorola’s traditional logo. The phone also comes with a 3.5mm headphone jack and comes in at least two distinct colorways. Worth noting that the 64GB model will sell for 149 Euros in Europe. However, it will be cheaper in Germany, we’re not sure how much cheaper it will be.

Considering the number of leaks and information, we expect the launch of the handset to happen in the next weeks.