Almost one month ago, Motorola unveiled the Moto G9 Play in India as a more affordable option than the vanilla G9. Now, the device is finally making way to the European market and the UK. Earlier today, the company disclosed the Moto E7 Plus, so we’re looking to a massive upgrade in the Motorola’s budget smartphone series in the old continent. The Moto G9 Play is a nice option for those looking for a good budget device with competitive specs and a low price tag.

If you’re familiar with the Moto G9 specifications, then you won’t see many surprises on the Moto G9 Play. The device keeps the “Play” series tradition of cutting some corners to deliver a more affordable package of specs. Under the hood, the handset packs the Snapdragon 662 chipset which is a lesser version of the last year’s Snapdragon 665. It’s an Octa-Core chipset with eight Cortex-A53 cores running at a 2.0GHz frequency, the graphical tasks are ensured by the Adreno 610 GPU. It can run modest games or even popular ones like PUBG and COD on average settings. The phone is paired with 4GB of RAM and up to 64GB of Internal Storage. You can further expand this amount via a microSD card. These specifications are built around a 6.5-inch LCD with an HD+ resolution. The display is quite similar to the other Moto G phones and comes with a waterdrop notch and rather thick bezels. The cutout serves a house for a modest 8MP sensor with f/2.2 aperture. Moving around to the back, we have a quite generous triple-camera setup with a 48MP shooter leading the way. It gets help from a 2MP depth module and a 2MP macro sensor. The camera housing stick with Motorola’s recurring design for 2020 smartphones a center-aligned squareish island. We also have a rear-mounted fingerprint scanner, that once again, is “hidden” by Motorola’s logo. 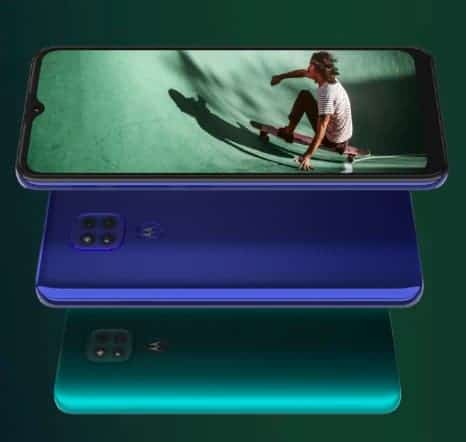 Customers in the UK can purchase the Moto G9 Play in Sapphire Blue and Forest Green colorways. The phone is already available through Amazon UK and Motorola’s website. The handset costs €169 across Europe, but in the UK customers can purchase it for €160.