We thought that Huawei would be the first company to unveil a 5nm chipset for mobile devices. However, with many reports suggesting the delay of the Mate 40 series powered by the 5nm-based Kirin 9000, Apple took the lead by unveiling its A14 Bionic yesterday which is based on the world’s most efficient 5nm standard. The new chipset will power the iPhone 12 generation, however, it will only come in the next month. For those who want to experience it right now, the company has the new iPad Air which ships with the very same chipset. The industry will now be moving straight to the new standard, and some popular Chinese companies like Xiaomi and Realme already made their move to build anticipation.

Today, Realme and Xiaomi’s executives teased the arrival of new products packing a 5nm flagship chipset. We don’t know if this was a mere coincidence or a planned response to each other. After all, both companies are now close competitors. 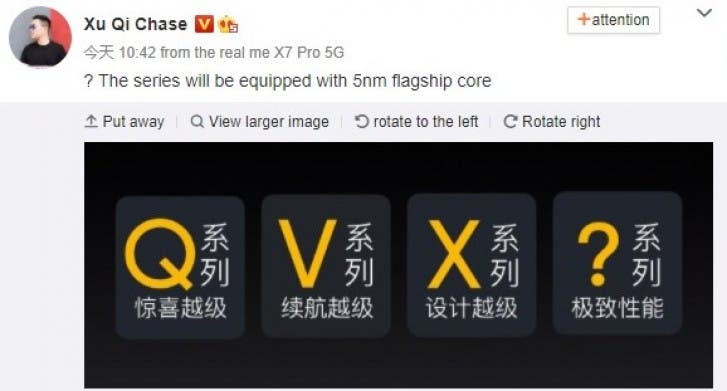 Interestingly enough, Realme VP Xu Qi Chase suggested the arrival of a brand new smartphone series featuring a 5nm chipset. We all know that the new chipset rocking a cutting-edge architecture probably will be the Snapdragon 875. Both Realme and Xiaomi are strong partners for the US-based chipmaker. Realme’s X-series is known for bringing flagship smartphones, or premium mid-ranges at the very least. However, devices like the Realme X50 Pro are cost-effective flagships with limited availability. Perhaps, in the next year, the company will introduce a new super-premium smartphone series featuring a cutting-edge chipset.

Xiaomi also has a 5nm flagship under wraps

Xiaomi, in counterpart to Realme, used a more cautious strategy to tease a new product. Lu Weibing replied to a post saying the new iPad Air is currently the only product featuring a 5nm chipset. The executive asked if Mi Fans are looking forward to new devices sporting the brand-new architecture. While he didn’t make any bold claim, this basically is the best indication we have of an upcoming Xiaomi device with the Snapdragon 875 SoC. We expect to see the next year’s Mi 11 (or Mi 20?) series debuting with the next Qualcomm flagship SoC.

The Qualcomm Snapdragon 875 SoC entered mass production two months ago. The first smartphones packing the SD875 may pop up in late January or throughout February 2021.

The new chipset brings ground-breaking performance thanks to the use of an ARM Cortex-X1 core. It will be aligned in a 1+3+4 CPU arrangement and will take the smartphone’s performance to higher heights. Rumors also suggest that this chip will be more expensive than its predecessors, so may see another bump in the price of flagships sporting it.

We expect to hear a lot about the Snapdragon 875 as well as its 5nm competitors now that we’re nearing the last quarter of 2020.