It was just yesterday that reports come from our trusted folks over at 91Mobiles who claimed that Samsung has been working on another new smartphone series. It will be a budget-oriented series and is likely to launch in India. Pricing of the Galaxy F series is expected to range from INR 15,000-20,000 (~$200-$270). Today, the Samsung Galaxy F41, probably the first smartphone in the F-Series has been spotted on Google Play Listing. 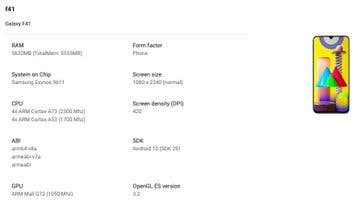 According to the Google Play Console listing, the Samsung Galaxy F41  will feature an FHD+ 1080 x 2349 px resolution with a screen density if 420 DPI, will be powered by the Exynos 9611 chipset coupled with 6GB’s of RAM under the hood. The handset seems to be in line with Samsung’s own offering from the Galaxy M series, the Galaxy M31. Lastly, the phone runs on OneUI based on Android 10 out of the box.

Individually, popular tipster Ishan Aggarwal has shared the schematics of Samsung Galaxy F41. According to the images, there’s a waterdrop display at the front. Around the rear, the handset has been tipped to feature a triple-camera setup with LED flash in a rectangular camera module and a fingerprint scanner. The phone is likely to house a Type-C port between the speaker grille and the 3.5mm headphone jack at the bottom, while the right counterpart will likely sport the volume rocker and power button.

The camera-centric series will attract a lot of people. As you know in the budget market, we already have good performance devices. However, there is a lack of good camera devices. Most of the budget phones come with a quad-camera setup. And to be frank, only the main sensor is capable. While the companies just include the other sensors for a marketing gimmick.

Even though we have 64-megapixel shooters on the budget phones, we have really evolved as much as we have done in other departments. Companies really compromise on the ultra-wide, depth, and include macro for no reason at all. So, there is still space for Samsung to introduce a new series aiming at cameras. Whereas, if you are a power-user then the Galaxy M series will serve you well.

Now let’s talk about the launch date for the Galaxy F series. The F series is coming sooner than you thought. According to the source, the Galaxy F series will make its debut next month. For the availability, there is info that the Galaxy F will be selling online initially and then move to offline markets as well. Tell me your thoughts on a camera-centric budget series from Samsung. Do you think Samsung will be able to get success with this idea?