A few days ago, statistical agency, Counterpoint Research, released an analysis report on the mobile phone AP (application processor) market in the second quarter of this year. From the perspective of the global market, Qualcomm’s chip market share in the quarter was 29%, followed by MediaTek with 26%. The gap between Qualcomm and MediaTek is very small. In the same period of last year, Qualcomm hit 33% while MediaTek hit 24%. While the market share of Qualcomm is plunging, MediaTek is rising. 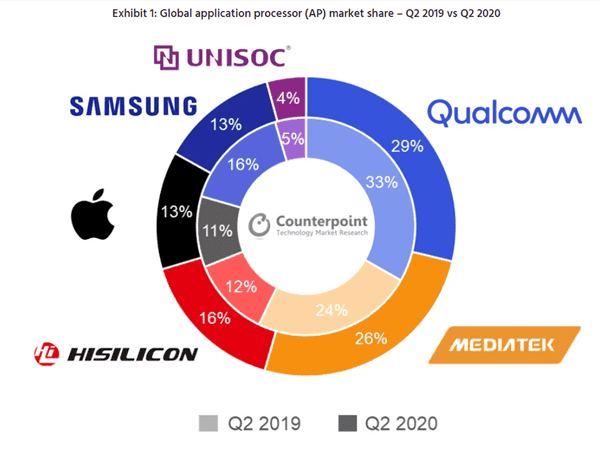 At the same time, compared with last year, Huawei HiSilicon surpassed Samsung, ranking third with a total shipment share of 16%. HiSilicon also managed a rise from 12% last year to 16% this year. Ziguang Zhanrui also appeared in the top six, but its share declined by 1% year-on-year. In terms of regional markets, Huawei HiSilicon’s advantages are particularly obvious in China, even comparable to the sum of Qualcomm + MediaTek. However, in North America and other Asian markets, the adoption of Huawei HiSilicon is pitifully small. 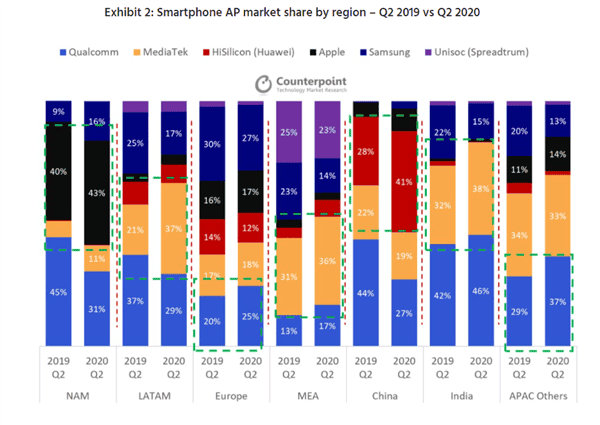 In addition, after the supply ban on September 15th, Huawei’s Kirin high-end chips share will drop drastically. In addition, Apple A14 and Qualcomm Snapdragon 875 usher in a period of strength. It is expected to be in the AP market data list in the third and fourth quarters of this year. There may be some shocks in Huawei’s ranking.