With just two years of existence, Realme has become one of the most important smartphone brands in the market right now. The company that started as an Oppo sub-brand now sail through separate waters to conquer popularity and rival with already-established companies like Xiaomi. Now, Realme even produces competitive flagships but never forgets what made its name – affordable smartphones. The company another step into the mid-range segment this month with the Realme 7 series unveiling. The company unveiled two compelling smartphones in the form of Realme 7 and Realme 7 Pro. Now, it is revealing a third member for the family dubbed Realme 7i. It is reaching the Indonesian market right now.

For those unaware, Realme always introduces an “i” variant for its numbered series that serves as a cost-effective version of the vanilla device. The Realme 7i isn’t any exception for the rule, but it does bring some nice specifications that put it forward to other devices in the segment. First of all, it comes with a huge LCD with a 6.5-inch diagonal and HD+ resolution. The icing on the cake is a 90Hz refresh rate. It’s nice to see that even cost-effective devices are now getting a smooth refresh rate. This display follows Realme’s current design guidelines with a top-left aligned punch hole.

Under the hood, the handset packs the Snapdragon 662 SoC. This is an Octa-Core chipset with eight Cortex-A53 cores clocked at 1.8GHz. Graphical tasks are ensured by an Adreno 610 GPU. Don’t expect the performance of a gaming chipset like the Helio G95 on the vanilla Realme 7, however, the SD662 can still run some popular games on average settings. The company is also generous in the RAM and storage size, the device comes in a single variant with 8GB of RAM and 128GB of Storage.

The camera department is composed of a Quad-Camera array comprising a 64MP primary, 8MP ultra-wide, 2MP monochrome, and 2MP depth shooters. Interestingly enough, the 7i follows the recurring design language marked by a square-ish camera cutout. Selfie lovers will get a 16MP snapper that lives inside the punch hole. The camera app includes UIS, UIS Max, and Ultra-Wide Angle Video recording.

In counterpart to its sibling, the Realme 7i comes with a rear-mounted fingerprint scanner. It draws power from a huge 5,000mAh battery complete with 18W fast-charging. The company gave step forwards with the Realme 7 series by bringing 30W charging to the vanilla and whopping 65W charging for the Realme 7 Pro. The 7i, however, keeps a more traditional charging speed. It runs Android 10 with Realme UI 1.0 straight out of the box. It obviously is eligible for a future Android 11 update.

As we mentioned before, the handset is only available in Indonesia right now. It should reach international markets in the coming months. For now, the company sells the handset at IDR 3,199,000 which is $215 or €180. There’s a discount for early buyers. The actual sales will start tomorrow.

A new version of Realme 7 with NFC also announced

Besides the Realme 7i, the company also announced the Realme 7 in Indonesia. As usual, it’s not the same variant available in India as it comes with NFC support. The device is available in a single variant with 128GB of storage and 8GB of RAM. Under the hood, we have the MediaTek’s Helio G95 SoC with a gaming-centric approach. 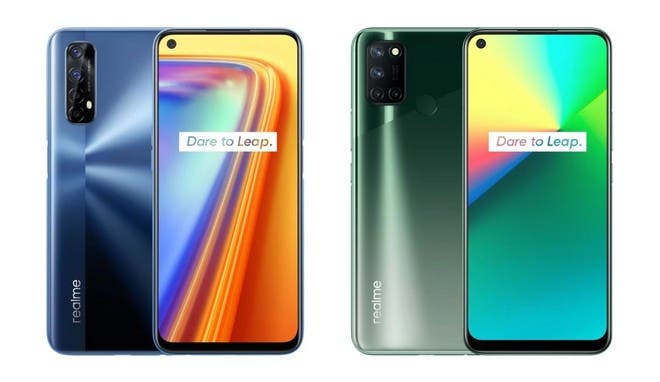 The device retails in Indonesia at IDR3,999,00 which is $270. Just like the 7i, the actual sales will open tomorrow through Realme’s online store. The device is available in Mist White and Mist Blue colorways.