Back in the last year, Samsung has pretty much reinvented its Galaxy lineup of smartphones with the Galaxy A and M series. In simpler words, these handsets brought some of the features that were only present in Sammy flagships to the budget segment. This year, the company gave a step further to expand the accessibility to these handsets with the introduction of the Galaxy A01. This is the most budget offering for customers who want to joing Samsung’s ecosystem. Now, the handset is about to get a new sequel dubbed Galaxy A02. It has passed through the GeekBench benchmark today revealing some of its key specs. 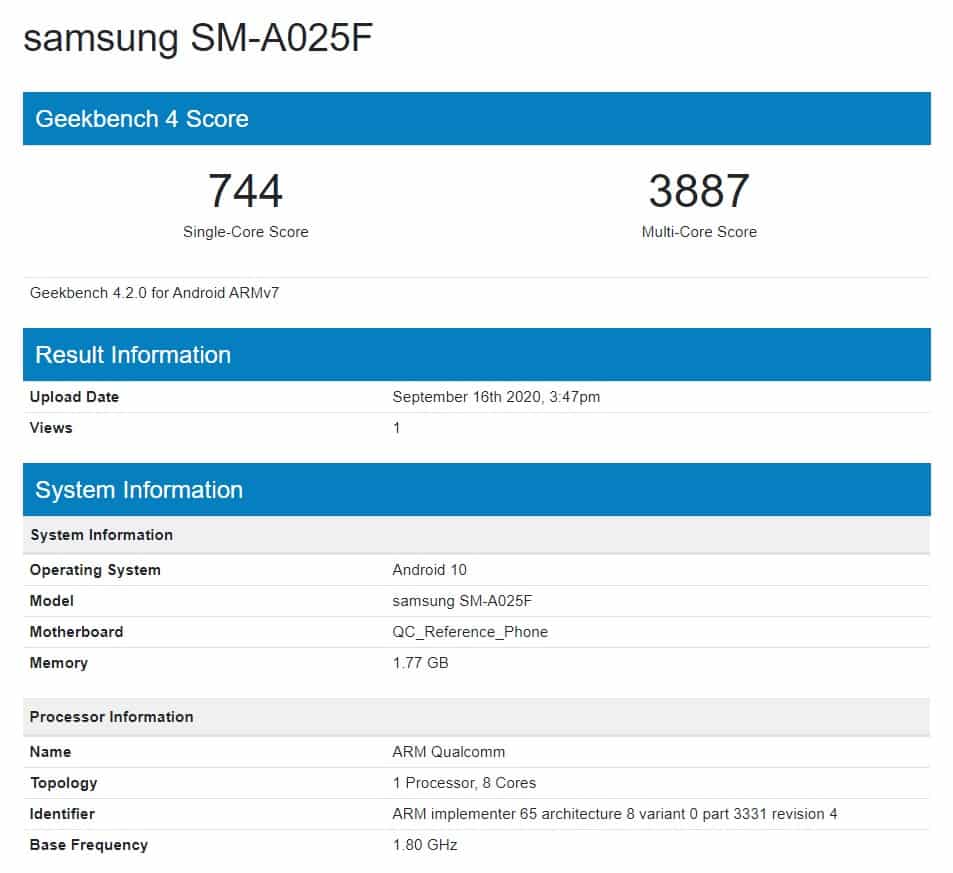 The new device passed through the benchmark platform with model number SM-A025F. According to Geekbench listing this handset packs a 1.8GHz Qualcomm chipset. Apparently, this is the Snapdragon 450 chipset from 2017 / 2018. It brings eight Cortex-A53 cores to the table and was the first 14nm Octa-Core chip to enter the SD4xx series. The chipset is quite enough for basic usage, but the amount RAM certainly won’t help. The device ships with just 2GB of RAM. In fact, starting November, Google will require all 2GB RAM Android phones to come with Android Go. So, the Galaxy A02 will likely hit the market before that endline as the handset runs stock Android 10.

In the Geekbench tests, the Samsung SM-A025F scored 744 points in the single-core test and 3,887 points in the multi-core department. These results are based on GeekBench 4.x. On a GeekBench 5.x platform they’ll surely be smaller. As we’ve mentioned above, the handset will be a direct successor for the Galaxy A01. Of course, it should be slightly better than the device that started the Galaxy A0-series. Despite its budget approach, the handset offers interesting specs like a double-camera system on the rear and a 5.7-inch display.

While the performance with the Snapdragon 450 will be better than that of the SD439 we expect the A02 to improve on other aspects as well. First of all, we belive that in 2020 3,000mAh should not be a standard anymore. So, hopefully, Samsung will expand it to 4,000mAh, this should come alongside a USB-C port to ensure fast-charging capabilities.

More details about the handset may appear in the coming days.

Previous Redmi phone with 108MP camera might be coming soon

Next OnePlus 8 Pro Review: The 'Pro' Machine the Users Demanded?