Samsung has been working hard to take the lead of the market for smartphone cameras. During the past years, the company has greatly expanded the goal of its camera division. That bought the first sensor with 64MP and a robust 108MP camera. Now, the company keeps running to deliver bigger and better sensors, but it is also working on incremental hardware to make its smartphones more powerful. According to a new document filed in EUIPO (European Union Intellectual Property Office), the company may reveal its first 3D ToF sensor dubbed ISOCELL Vizion. This particular feature will be part of the next year’s Galaxy S21 family.

The description gives some interesting insight into this sensor’s capabilities. According to the report, if Samsung decides to put one on the front it is capable of providing a reliable facial recognition feature. Once again, there’s no confirmation of this sensor’s availability on the S21 lineup, but it can be a great way to make its future flagship more interesting than the competition. 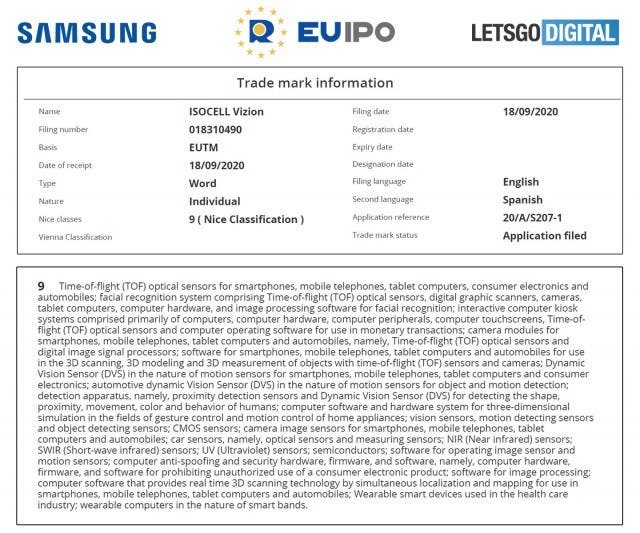 Reports state that the Galaxy Note20 series almost came with a 3D ToF sensor. However, Samsung had to ultimately drop this idea. After all, Sony could not supply these chips due to the high demand from Apple. For the next year, Samsung wants to avoid this kind of problem by developing a strong solution that will always be ready for its own smartphones. These sensors may be ready for the S21 series, but we may take this with a pinch of salt until more concrete info appears.

For now, we should expect the Galaxy S21 cameras to be quite similar to that of the Note 20 family. Of course, the 3D ToF may be a good inclusion for this powerful setup.