Back in the last month, Samsung unveiled the Galaxy Note 20 and 20 Ultra. One could think that now the company is having a good rest in 2020, but that’s not how this competitive business works. We can say that Samsung is pretty much done with its 2020 flagships, but that only starts the full development of the next year’s flagship series, presumably the Galaxy S21 series. The first wave of rumors started to spread with news about the upcoming handsets. Apart from the Note 20 series that killed the Plus variant, we are expecting three Galaxy S21 devices next year, the S21, S21+, and Galaxy S21 Ultra. The first two appeared on 3C certifications, now the Ultra variant appeared on TUV Rheiland with a massive 5,000mAh battery. It comes to corroborate with previous reports stating this capacity on the upcoming flagship. 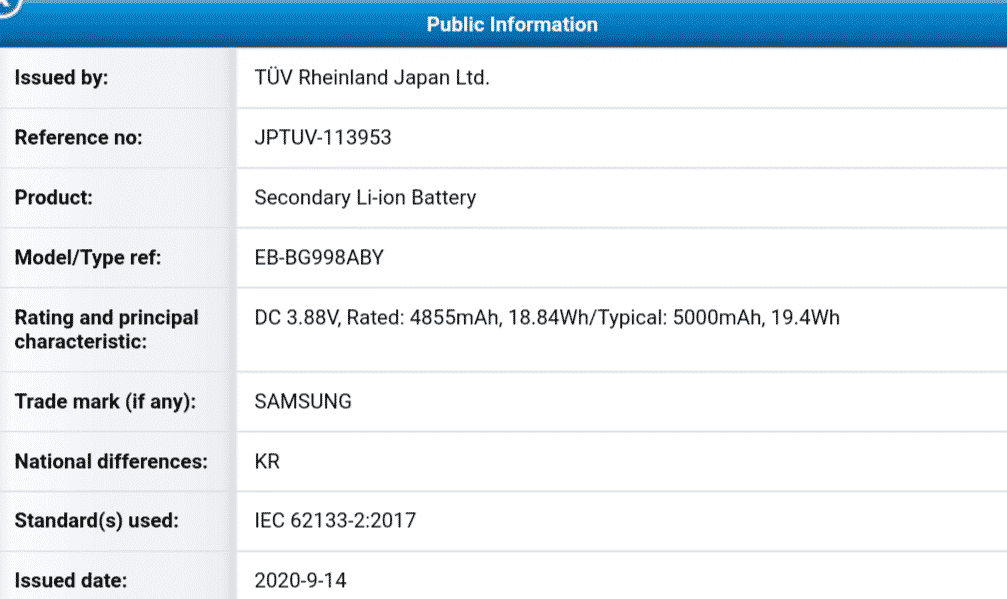 The handset’s battery appeared in TUV listing with EB-BG998ABY (SM-G998) model number. As per the listing that attests to the safety of a battery, the Galaxy S21 Ultra will be equipped with a 4,855mAh battery. This is just the actual size, while the typical capacity should be set at 5,000mAh. The Galaxy S21 smartphones will be way more powerful than Galaxy S20 and power efficient. After all, these devices are set to debut with the 5nm Exynos 1000 and Qualcomm Snapdragon 875 chipsets. Worth noting that Samsung is also working on the OneUI branch for these handsets that are set to come with Android 11 undercover.

The Galaxy S21 and S21+ also had their battery capacity revealed

Besides the S21 Ultra, the vanilla variant visited 3C certification with the EB-BG991ABY model number (SM-G991). The Plus variant sports the EB-BG996ABY (SM-G996) model number and also passed through the Chinese regulatory agency. According to the listing, the Galaxy S21 packs a rather modest 3,880mAh battery. The S21+, in counterpart, has a capable battery with 4,660mAh battery. We’re not very happy with the battery capacity of the S21, perhaps the typical capacity will be labeled as 4,000mAh. Of course, the newer 5nm chipsets are set to provide a new level of energy efficiency. But in the end, it’s better to have a big battery with efficient processor than being stagnated.

We advert you to take these reports with a pinch or two of salt. After all, we still have several months to go before the official release of the Galaxy S21 series. Not even the names are really confirmed right now, as Samsung could even jump ten houses and name them Galaxy S30.