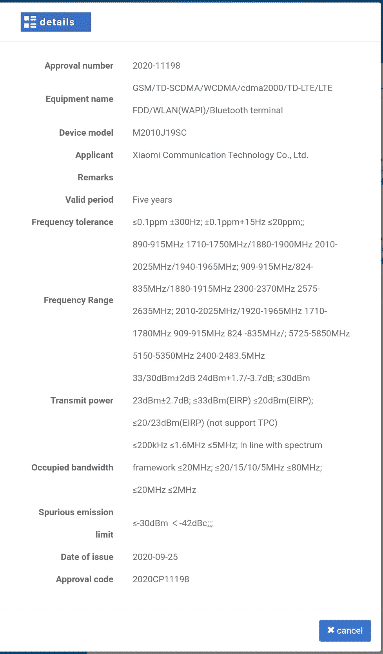 Today, the aforementioned device carrying this model number passed through the MIIT database. According to speculation, this device is, in fact, the LTE-only Redmi Note 10 variant. We’re not sure about the company’s plans for the Redmi Note 10 5G phones, however, the Note 10 4G is likely coming to many more countries where 5G is not available. The MIIT database reveals some interesting details about the handset as frequency range, transmit power, and more.

A couple of days ago, the Redmi Note 10 5G passed through MIIT. According to early reports, the new model bearing fifth-gen network support will be given by the recently released Snapdragon 750G chipset. Moreover, it will be packed with 8GB of RAM and Android 10. We assume, that it will not take much time to be released as it still comes with Android 10. Besides Note 10, the company is also preparing a Pro variant. This variant is common since the Note 5 Pro days and the tenth generation will not exclude it. The top offering will come with a high-refresh-rate display, large storage, and improved cameras. We expect to see Redmi introducing 90Hz or even 120Hz displays with the Note 10 series. After all, Note 9 has been left behind with 60Hz displays.

REDMI NOTE 10 FEATURES (BASED ON LEAKS)

In other aspects, according to previously exposed news, the new Redmi Note 10 series will use a 6.67-inch LCD full-screen with a hole-punch design. Also, its resolution will be 2400×1080 pixels. And the screen will have a 120Hz screen refresh rate as well as a 240Hz touch sampling rate. Thus, the Redmi Note 10 won’t lay behind of the Redmi K30, Redmi K30 5G, Redmi K30i, and Redmi K30 5G Ultra. As you know, the all aforementioned models as considered to sport high-refresh-rate smartphones. Also, we have learned that the Redmi Note 10 will sport an octa-core processor. It will come with up to 8GB RAM and run on the Android 10 system.

Next Realme 6 Receives a New Update with September 2020 Security, WiFi Fix and more