After completing its plans for the flagship segment with the premium Oppo Find X2 series, the Chinese firm moved on its focus to the Reno series. After all, the Reno smartphones basically put Oppo in the headlines last year due to their value for money. A couple of months ago, the company unveiled the Oppo Reno4 and Reno4 Pro in China featuring 5G connectivity, thanks to the use of the Snapdragon 765G. Then, one month later, the company brought the Reno4 series to India and global markets, but with a surprise. Instead of the 5G chipset, global customers got the Snapdragon 720G (LTE-only) variants with slightly different cameras. With this, the Reno4 series grow to four smartphones. Recently, the company unveiled the Reno4 SE and reports are pointing to the release of another device dubbed Reno4 Lite. Now, a new poster has confirmed the arrival of another member for this growing family dubbed Oppo Reno4 F. 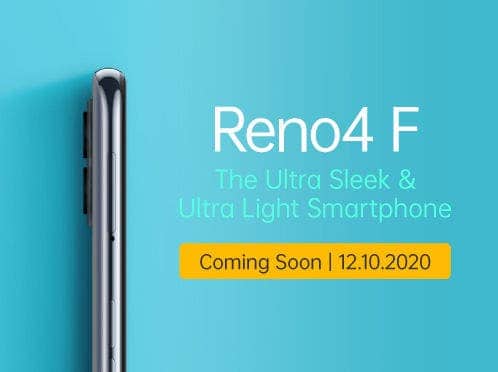 According to a report from MySmartPrice, the Oppo Reno4 F will be released on October 12. The report even brings us a poster that teases the handset along with its alleged launch date. It will hit one of Oppo’s key markets first – Indonesia. Since the device is going official in just a couple of weeks from now, the Chinese maker already started a teasing campaign on its social media channels and YouTube in Indonesia. However, Oppo still keeps the launch date a secret. For that reason, let’s digest the October 12 bit with a pinch of salt.

The leaked posters reveal that the smartphone will bring a super-sleek form factor and will also be very lightweight. We just hope that the company isn’t exchanging battery power for design here. The phone has its volume buttons and a sim card slot on the left side. The right portion serves as a house for the Power button. The company even teased the design of the upcoming device through its Twitter account. This latter image confirms the presence of a Quad-Camera setup on the back.

The company’s YouTube video reveals that the device is 7.48mm thick and comes with a Super AMOLED display. We’re probably looking at a dual-punch hole display as the video suggests. Unfortunately, the device is quite limited in colors since it will be available in Black and White colors only.

For now, information is still scarce, but we’ll probably know more about this device in the coming days. Oppo has just released the Oppo A33 and A53 smartphones in Indonesia, so we’re discarding the probably of the Oppo Reno4 F being a rebranding of those devices. The device’s design is very close to the Oppo Reno4 SE, but why would Oppo bring a 5G smartphone to Indonesia where the main Reno4 5G is yet to grow in global availability?

Next Besides OnePlus 8T, There Will Be 5 Other Smartphones On October 14 [Updated]