When it comes to Android updates, HMD Global is one of the few companies that release it on time. As of now, almost all Nokia phones are already on Android 10. With the company almost done with the Android 10 update, it is moving over to the next phase. Google’s latest system, Android 11, is already available for Pixel devices. With the Android 11 update already available, it is only a matter of time before Nokia releases it for its devices. However, Nokia users have been wondering when this update will start rolling out.

Yesterday, HMD Global released the Android 11 update timetable for Nokia smartphones. Strangely, the company quickly deleted the tweet. Nevertheless, netizens quickly grabbed a screenshot of the tweet before it went down. However, why did HMD Global delete the tweet? According to recent reports, the information hit the public domain “too early”. Although Nokia is done with the update release schedule, the company is still revising the schedule.

According to the information in the screenshot, then HMD plans to update to Android 11 all smartphones that came out immediately with Android 9 Pie or Android 10:

The oldest smartphone on this list is Nokia 8.1, which debuted at the end of 2018 and became the company’s first phone with Android Pie right out of the box. Many interesting models will remain without the update, including the flagship Nokia 8 Sirocco and the cheap Nokia 1. 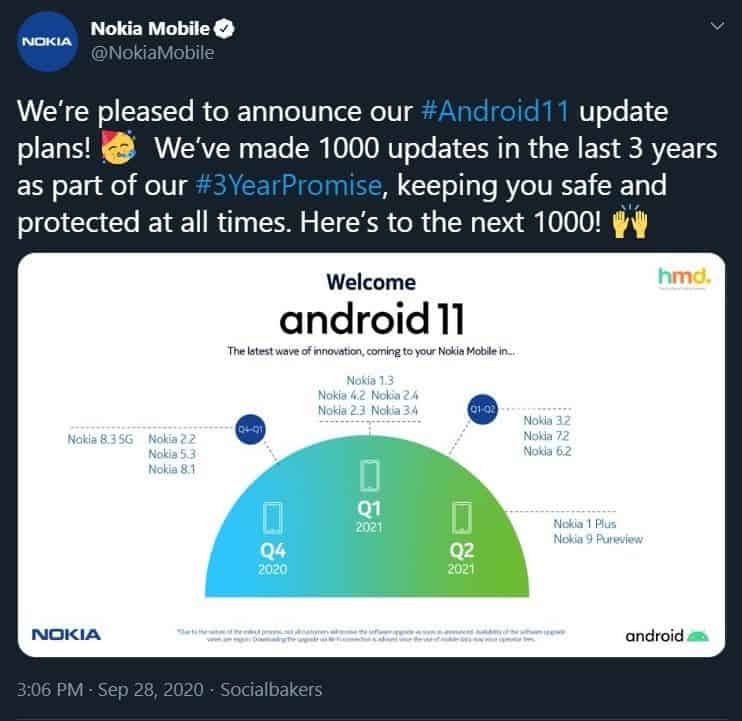 What we can say for now is that this update schedule should be a guide for Nokia users. This is most likely not the final schedule as Nokia is still working on it. We may have some additions, omissions, or re-adjustment to this schedule.

In all, it appears that the Android 11 update is still facing some troubles. According to recent reports, users are experiencing a bug that breaks multitasking on this system. The bug break users’ ability to swipe up and view recently used applications.

Furthermore, this update sometimes causes the phone to flash black with a strange zoom effect. This prevents users from opening the application any further. The multitasking errors appear on all Pixel devices updated to Android 11, including Pixel 2, 3, 4, and even 4a.

In addition to multitasking issues and black screen flickers, there are also reports of the camera app crashing in Google’s latest system. With these issues on the Android 11, OEMs will have to find a way around them before releasing the update.

Next Here Is The Truth Behind OPPO A93 Launching In Malaysia