As expected, the second quarter of this year was not the best in the history of the smartphone market; and manufacturers were forced to sign for a drop in sales and that the profit from the sale of devices began to decline. So, according to ComprarAcciones, at the end of the second quarter of 2020, sales of phones amounted to 294.7 million; which is 20.4% less than in the same period last year, when 370.3 million units were sold.

The leaders were Huawei and Samsung, which managed to take 20% each of the market share; supplying 54.1 million and 57.7 million devices, respectively. In third place was Apple, which controls 13.5% of the market and has 38.3 million delivered phones. And I must say that Apple sales are stable and its losses are less than other manufacturers. For comparison, in 2019, iPhone shipments amounted to 38.5 million.

Xiaomi was in the fourth line of the manufacturers’ table of ranks, with a share of 10.2%. The only brand whose shipments were growing was Realme, up 11%. 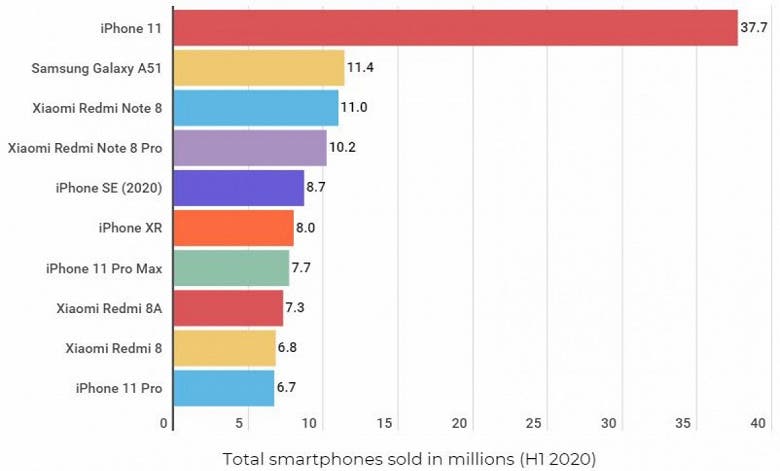 ComprarAcciones also told which smartphones have won the greatest love among users in the first half of 2020. And, as it turned out, only three brands made it to the top 10: Apple, Xiaomi and Samsung. Five places out of ten were for iPhone models, four positions were taken by Xiaomi devices, and only one place went to Samsung due to the Galaxy A51.

The iPhone 11 leads by a decent margin. And Apple managed to sell 37.7 million units of this device in three months. In second place was the Samsung Galaxy A51, which sold 11.4 million devices. Closed the top three – Redmi Note 8 with a score of 11 million units. The top 10 also includes Redmi Note 8 Pro, Redmi 8 and Redmi 8A, iPhone SE 2020, iPhone XR, iPhone 11 Pro and iPhone 11 Pro Max.

The SellCell online store has shared unexpected research results, polling more than 2,000 Android users. It turned out that a third (33.1%) of them are considering buying a device from the iPhone 12 series. Moreover, for 55.9% of respondents, the main reason for this desire is not the smartphone itself; but rather the iOS operating system with its long update period. 48.8% said that the main goal of moving to the iPhone 12 is the higher degree of protection of personal data.

It is noteworthy that 36.9% of respondents are ready to leave Android because of the desire to get a more compact device, and when asked which of the four future iPhone 12 models they would choose, the vast majority (48.1%) named the iPhone 12 mini. And although the number of the sample is not large enough, some tendencies based on the survey results can be deduced. Users are more likely to be interested in the quality and support of software; and with them the physical convenience in work due to compact dimensions.