As we’re getting closer to winter holidays, it’s about time you start looking for the next gift for yourself or someone dear to you. If you don’t have a big budget at your disposal, this top 5 will bring you the  best Chinese phones for under $100; keep reading!

Albeit out for several months out at this point, the Realme C3 is still the smartphone to get for about $100. Realme’s entry-level phone (on paper) does indeed pack some quite powerful hardware, such as the MediaTek Helio G70 CPU, along with 3GB of RAM and 32GB of internal storage (expandable via microSD).

The just mentioned hardware will then be easily accessible on a large 6.5-inch panel with HD+ resolution with Realme UI based on Android 10, while being fueled by a 5000mAh capacity battery.

Camera wise, the Realme C3 brings two rear cameras, consisting in a primary 12MP sensor, a secondary 2MP macro lens and a third 2MP shooter, though the latter can only capture depth data to create photos with the fancy bokeh effect. Meanwhile selfies are handled by a 5MP snapper at the front.

Another very interesting and more recent alternative coming from the same brand is the more affordable Realme C11. This smartphone sees a downgrade in CPU performance, packing a still very good MediaTek Helio G35 SoC, paired with 2GB of RAM and 32GB of internal storage.

The Realme C11 also features a large 6.5-inch panel with HD+ resolution, runs Realme UI based on Android 10 and is fueled by a 5000mAh capacity battery.

Meanwhile for photography we find a 13MP main sensor and a 2MP portrait camera on the back, and a 5MP selfie snapper at the front.

Next we have a smartphone from Realme‘s toughest competitor – Redmi. The Redmi 9A features a similar 6.53-inch panel with HD+ resolution, but is fueled by a less powerful MediaTek Helio G25; along with 2GB of RAM and 32GB of internal storage (expandable through microSD).

Redmi’s phone only features a single rear camera though, with a resolution of 13MP, meanwhile at the front we find a 5MP selfie snapper.

Finally, we also find 5000mAh capacity battery, with the smartphone running MIUI 11 based on Android 10.

Looking for something more compact, then the Honor Play 3e could be a very interesting alternative for you. The smartphone does indeed feature a small 5.71-inch display and is fueled by a MediaTek Helio P22, 2GB of RAM and 32GB of storage (expandable via microSD).

The Honor Play 3e is packed with a 3020mAh capacity battery and runs EMUI based on Android 9 out of the box. 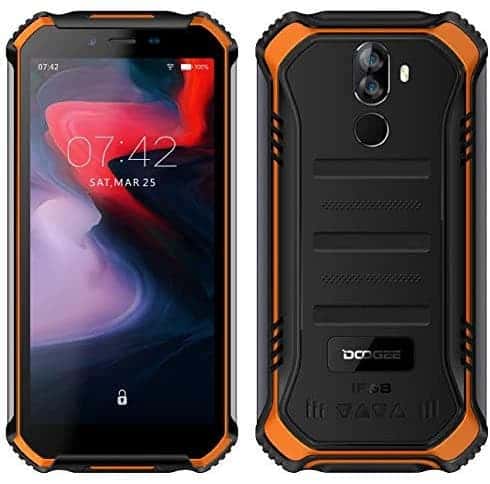 Last but not least, if your job requires you to get dirty in some capacity or work in harsh environments, then the Doogee S40 Pro is probably the best option for you under $100. Doogee’s phone is indeed a rugged phone coming with a good Mediatek Helio A25 SoC, plenty of RAM at 4GB and 64GB of internal storage (expandable via microSD).

The handset features a 5.5-inch display with HD+ resolution, two rear cameras with a 13MP primary and 2MP secondary to capture depth data. Meanwhile selfies well be managed by a 5MP snapper.