Earlier this week, a Samsung 5G phone with model number SM-G9910 passed the Chinese 3C certification, This smartphone comes with a 25W charger. Subsequently, Samsung models with model numbers SM-G9960 and SM-G9980 have successively passed the 3C certification. According to Samsung’s general practice, they are probably Galaxy S21+ 5G and Galaxy S21 Ultra 5G. As we can see from the certification, all the models come with a 25W charging adapter (EP-TA800 as standard). 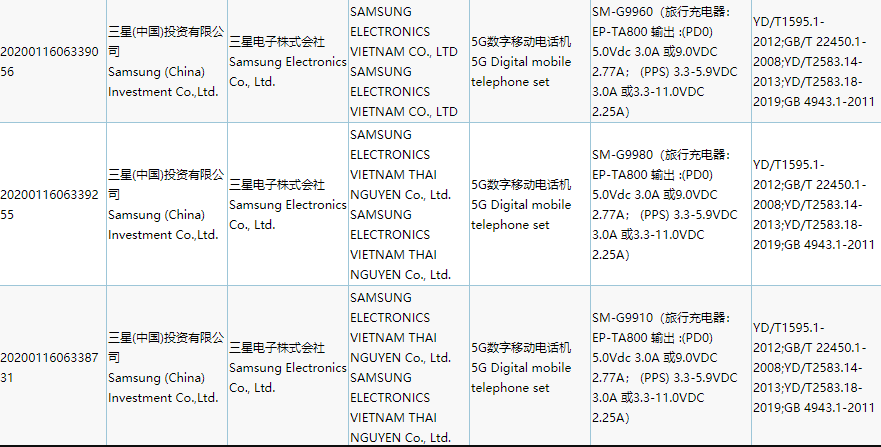 There are currently reports that Samsung Electronics mass-produced the Galaxy S21 ahead of schedule to seize the market share that Huawei had vacated due to the ban. Samsung’s network access certification this year is indeed earlier than before. This also confirms that Samsung will release/launch the next generation of Galaxy S series phones in advance.

The EP-TA800 is Samsung’s first USB Type-C charger. This charger first came with the Samsung Galaxy S10 5G, supporting up to 11.0VDC 2.25A 25W fast charging.

As usual, Samsung will launch two Galaxy S series flagship mobile phones in Europe, America, and Asia. It is possible that the Samsung Galaxy S21 will also be the world’s first Snapdragon 875 model.

In the camera department, there are some unverifiable rumors regarding this series. There are claims that the main camera will be a 150MP shooter. This will be the first in the industry. It will also have a 64MP telephoto lens, 16MP ultra-wide-angle lens, 12MP wide-angle lens, and a 3D ToF camera.

In addition, Samsung Galaxy S21 is a name recognized by most media and whistleblowers. Samsung has never officially announced the official name, and there is a possibility that it could be called Galaxy S30.

Next DxOMark: iPhone 12 Pro Max camera is not the best