Yesterday, October 16, Apple began accepting pre-orders for the iPhone 12 and iPhone 12 Pro. And today, reviewers and specialized resources began to receive their copies of new iPhones. But until October 21, they are not entitled to publish reviews and comparisons. Among those who received the iPhone 12 Pro Max for the test were the specialists of the DxOMark lab. They have already given preliminary comments about the smartphone.

In particular, they expressed doubts that the telephoto lens of the iPhone 12 Pro Max will surprise and impress with its capabilities. In their opinion, neither the focal length increased to 65 mm, nor the 5x optical zoom gives a competitive advantage over rivals. Also, in terms of its capabilities, the camera should be inferior to the zoom lenses in the Huawei P40 Pro and the Xiaomi Mi 10 Ultra, where sensors with a focal length of 125 mm and 120 mm are installed, respectively. 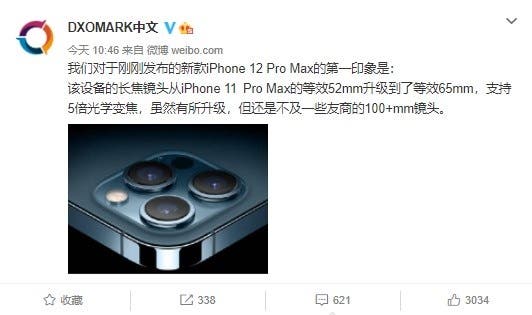 Such statements already indicate that DxOMark experts are skeptical about the iPhone 12 Pro Max camera and they are unlikely to give a high score to the new product from Apple. However, let’s not rush to conclusions, but wait for a full review from DxOMark.

DxOMark specialists have finally published a review of the Samsung Galaxy Note 20 Ultra smartphone. Surprisingly, the new flagship of the Koreans not only did not become the best in the rating of the platform; but could not even get around the Galaxy S20 Ultra model, taking only tenth place. The Note 20 Ultra received 130 points for photo quality and 101 points for video. Still, the Note20 Ultra is one of the best camera phones at the moment, and the gap from the leader in the DxOMark rating is only 9 points. And many have questions about this rating.