Exynos is Samsung’s pride and pain. On the one hand, the company is proud of the fact that it managed to organize the production of branded chips, and their presence on the market allows it not only to reduce its dependence on third-party manufacturers, but also to compete with Qualcomm offers. On the other hand, Samsung’s flagship SoCs are inferior to the Snapdragon 800 series solutions. But, it seems that this may end with the upcoming Exynos 9925 SoC.

Samsung Exynos 9925 SoC will arrive with a high-performance graphics

As we all know
Exynos9830=Exynos990, Exynos9840=Exynos2100,
Now, Samsung is developing Exynos9855 and Exynos9925, the latter may be a processor with AMD GPU pic.twitter.com/LixFZNBNXD

In the wake of the growing criticism and accusations of the inability of the South Korean giant to create truly competitive chips, it seems to have seriously undertaken to prove the opposite. First, the company plans to rely on ARM solutions and has entered into an agreement to jointly develop chips. Secondly, it enlisted the support of AMD in the creation of mobile video accelerators.

According to the authoritative source Ice Universe, the company is working on the Exynos 9925 chip, where the graphics accelerator will use AMD technologies to achieve high performance.

Recall that last year, Samsung and AMD entered into a multi-year agreement, under which the South Korean giant will have access to the RDNA graphics architecture for use in their chips. This will allow in the future to replace the Mali graphics with more powerful solutions.

When the Exynos 9925 will be available? there is no information available. But given the fact that earlier there was talk that AMD graphics will appear in Exynos only in 2022, then Samsung will not announce the new chip earlier than the second half of 2021.

Now the company is also working on the creation of a 5nm Exynos 2100 processor, which should form the basis of the company’s new flagships from 2021. According to forecasts, it will not be able to bypass the Snapdragon 875 in terms of performance.

The first results of the Exynos 1080 SoC test in AnTuTu

Recently, it became known that by the end of this year Samsung will introduce a new Exynos 1080 chip and the first smartphone with it on board will be the Vivo X60. It will be a high-performance chip, which in AnTuTu will be able to show a result exceeding 650 thousand points.

This statement has been confirmed. The network leaked the results of the test in AnTuTu of an unknown smartphone with the codename Orion and it is based on the 5-nm Exynos 1080 platform. Its result is 693,600 points. And that’s more than the Snapdragon 865/865+ based smartphones demonstrate. 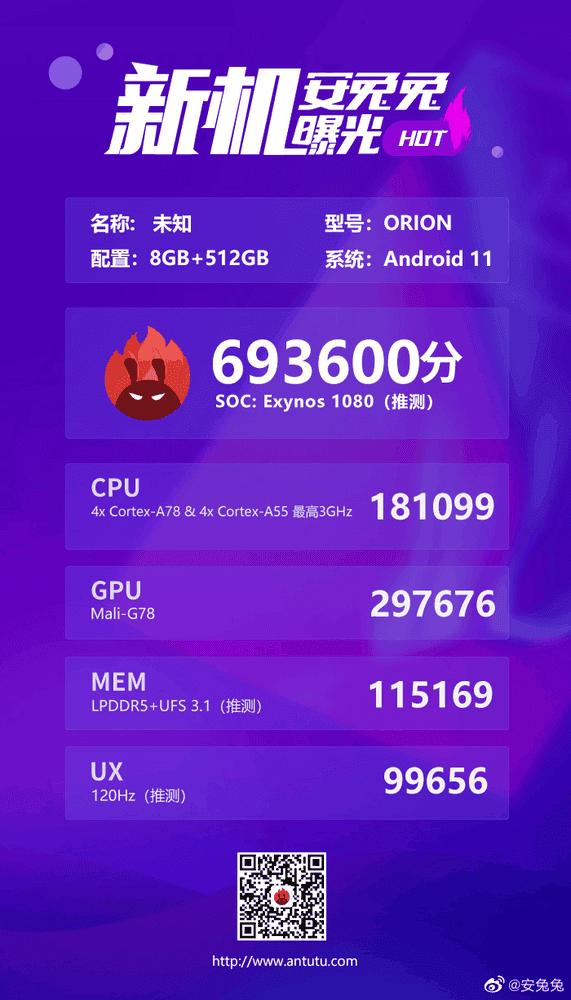 We know that the Exynos 1080 chip owes its power to the high-performance Cortex-A78 cores. The Mali-G78 video accelerator is responsible for graphics processing. Interestingly, this processor is not designed to target Samsung’s flagship smartphones. Exynos 2100 SoC was prepared for them, which, possibly, will receive one Cortex-X1 super-core.

As for the smartphone codenamed Orion; the benchmark was able to recognize that it has a 2376×1080 display with a 120Hz refresh rate. It also has 8GB of LPDDR5 RAM, a 512GB UFS 3.1 flash drive and Android 11 operating system.

Next Galaxy S21 series render surfaces on the web, here's how lineup might look