Back in the last week, Apple introduced four new iPhones to the world in the form of iPhone 12, 12 Mini, 12 Pro, and 12 Pro Max. The new handsets came with some incremental changes in design and revamped hardware. The company also made some changes to the display’s sizes and the quality of these panels. This year, Apple partnered with Corning to develop a new glass coating dubbed “Ceramic Shield”. We don’t know exactly if this new solution is much different than the most cutting edge Gorilla Glass solution. It’s not uncommon to see Apple taking current technologies and renaming them to make it more exclusive or to give a new “marketing” appeal. The fact is, that users needing to replace an iPhone 12 Display with Ceramic Shield glass will have to pay as same as they did with the iPhone 11 Pro glass.

According to a new report, Apple will charge customers $279 to replace the iPhone 12 OLED panel. That’s the same amount needed for an iPhone 11 Pro display. However, the display is also more durable than the one on its predecessor. According to Apple, the so-called Ceramic Shield coating on the iPhone 12 family is four times harder to break than the glass solution found on the iPhone 11. Moreover, despite being an OLED panel it is just $80 more expensive to replace than the vanilla iPhone 11 LCD panel. We all know, how OLED displays tend to be way more expensive to replace than common LCDs. 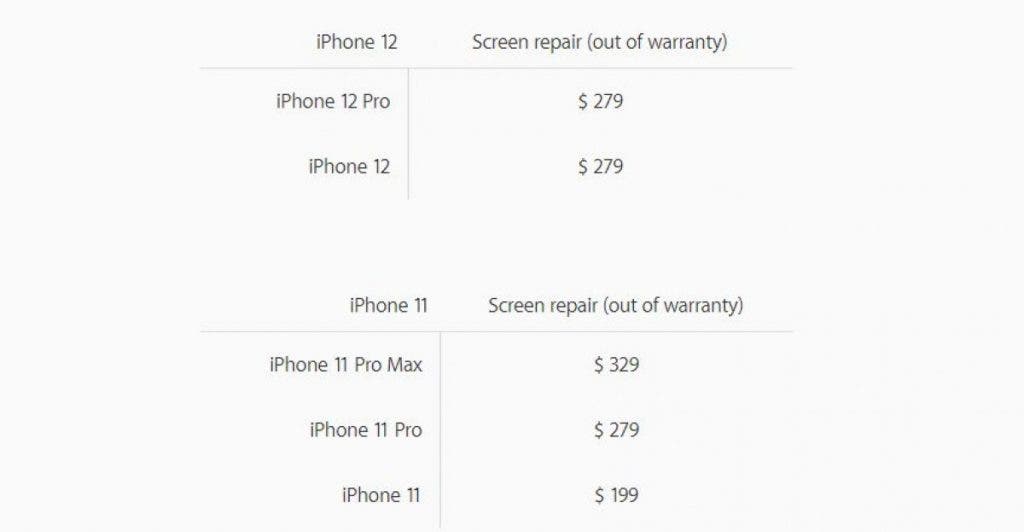 Prices for the 5.4-inch and 6.7-inch displays repair will only be revealed in November

We know that no one buying a new iPhone wants to drop and break it, but accidents can happen. For that reason, Apple has been kind enough to provide a list of prices for repairing the new 6.1-inch models. The pricing for the 5.4-inch iPhone 12 Mini and 6.7-inch iPhone 12 Pro Max will be listed soon. This isn’t a surprise, after all, the new devices will only hit the shelves in November. We expect the bigger 12 Pro Max to cost around $329 to repair. It may cost the same as the XS Max and last year’s 11 Pro Max. Apple is charging the same price for the iPhone 12. For that reason, we expect the other models to follow the same pricing as their predecessors. In theory, the iPhone 12 Mini should cost less to repair, but only time will tell.

For other damage, Apple will charge $549 to fix the 12 Pro, just like its predecessor. However, the iPhone 12 will host $449 for this kind of repair, which is $50 more than its predecessor

Previous Huawei Mate 40 series pricing in China has been revealed