Motorola is gearing up for the launch of its new smartphone in the mid-range segment. A new Motorola’s unnamed smartphone with model number XT2091 is spotted on FCC, Eurasian Economic Commission (EEC), and TUV Rheinland Japan certifications. These certifications reveal some of the key specs like battery, charging speed, and rear design of the smartphone.

According to the Motorola XT2091 FCC listing, the smartphone has two variants with model numbers XT2091-3 and XT2091-8. Alhtough both the variants will have same specs, but XT2091-8 will debut as Lenovo branded smartphone. The company did same with Motorola Moto G9 that was launched as Lenovo K12 later in the future. Motorola’s new smartphone has a huge 6000 mAh battery with model number MC50 with 20W fast charging. These specifications are also confirmed in the TUV Rheinland Japan certification.

Taking a look at the design of Motorola XT2091, the smartphone packs a triple-camera setup at the back with an LED flash. It also packs fingerprint sensor at the back side. Moreover, after having a closer look at the photo we are able to spot a volume rocker and power button on the right side of the phone. 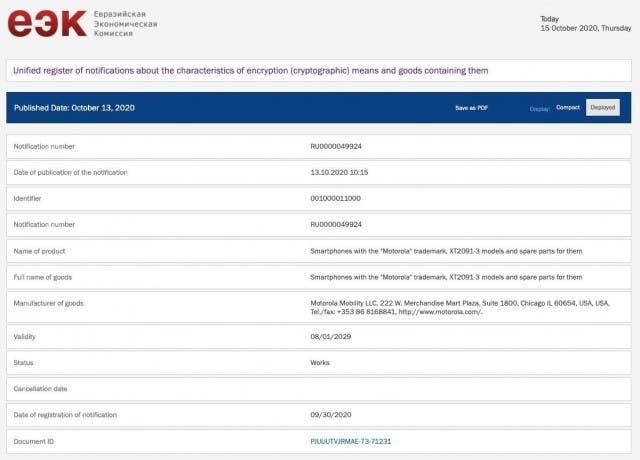 Motorola’s new smartphone with model number XT2091-3 also gets the Eurasian Economic Commission (EEC) certification clearing its way for launch in Russia. We expect some more leaks and reports related to the new phone in coming few days.