A couple of days ago, Apple revealed to the world its iPhone 12 family in the form of a vanilla iPhone 12, a 12 Pro, 12 Pro Max, and a small model dubbed iPhone 12 Mini. As usual, Apple used all its marketing strategies to reveal the handset and all appeal that it brings but failed to give many technical details about it. The company is well known for not disclosing some details like battery capacity and RAM amount during its keynotes. This year wasn’t an exception. As far as the iPhone 12 Pro Max is concerned, we finally know its actual battery size thanks to the Chinese regulatory agency TENAA. If you’re used to 2020 Android phones, we have to say, the 3,687mAh battery is far from being impressive.

The new iPhone 12 Pro has a 3,687mAh battery that is below some Android phones that already crossed the 7,000mAh mark. Google will probably think that this is a good amount since its Pixel 5 also does not impress in battery size. In fact, Apple downgraded the battery in comparison to last year’s iPhone 11 Pro Max. The older model came with a 3,969mAh battery. Perhaps, the company thinks that the new power-efficient 5nm chipset will reduce the difference between these two sizes. Apart from the battery size, the iPhone 12 Pro Max comes with 6GB of RAM. This is on par with what you expect from a 2020 flagship. However, once again, Android phones are even playing with twice that amount nowadays. 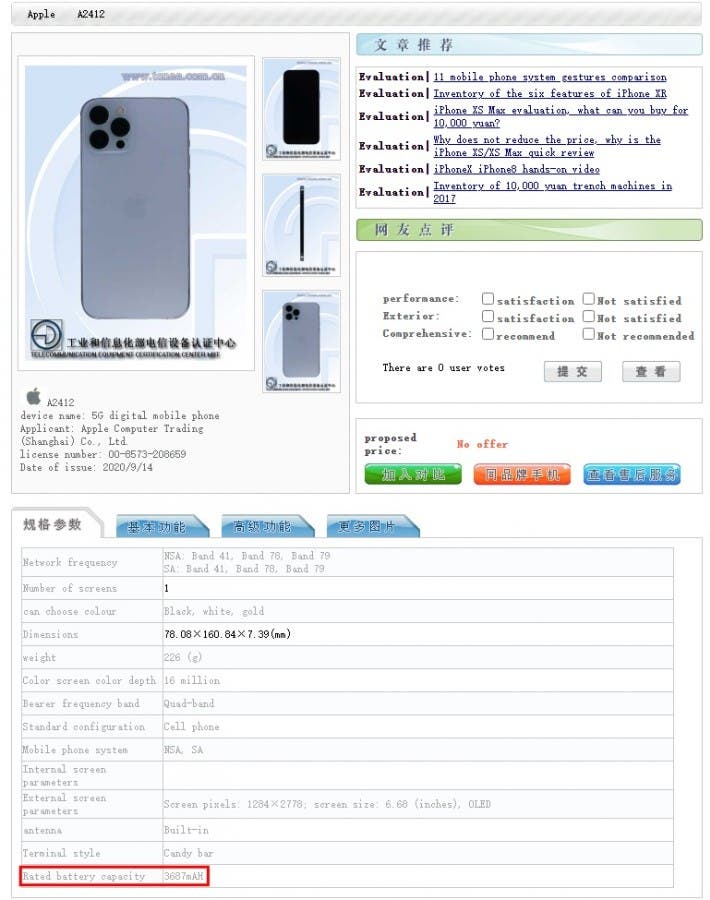 The other iPhone models already had their battery capacities revealed by some official listings. The iPhone 12 and 12 Pro come with a very modest 2,815mAh battery. The iPhone 12 Mini also has a “mini” 2,227mAh cell. We are waiting to see the Apple A14 Bionic 5nm chipset magic. However, we don’t think that the three non-Max models can last more than a day with a single charge. The iPhone 12 Mini may even suffer to last an entire day. Unfortunately, we’re in 2020, and Apple still does not seem concerned with the battery life of its iPhones. To make things worse, the new iPhones don’t come with a charging brick.

According to the first reviews, the iPhone 12 and 12 Pro can’t last as long as last year’s iPhone 11 Pro. The other two models will still take some days to reach the reviewer’s hands. However, we don’t think that their battery life will be something to write about.

Previous Nokia 8.3 5G is set to get the dual card 5G support update