A few days ago, a new patent for another foldable smartphone from Huawei hit the public domain. According to reports, Huawei is developing a relatively cheap phone with a flip-up top and bottom, which has dual rear cameras. The Huawei 5G foldable phone uses a clamshell design and it is a low version of the Mate X.

It can be intuitively seen from the figure that the difference between this phone and the Samsung Galaxy Z Flip is that the front is all screens, the small secondary screen on the back, and the vertical dual camera. If not for the under-screen camera, it is obvious that this design will not be feasible.

This is not the first time Huawei has obtained a patent for a flip smartphone. In July this year, there was a similar patent for a Huawei flip phone. However, this time the secondary screen design is obviously much larger. 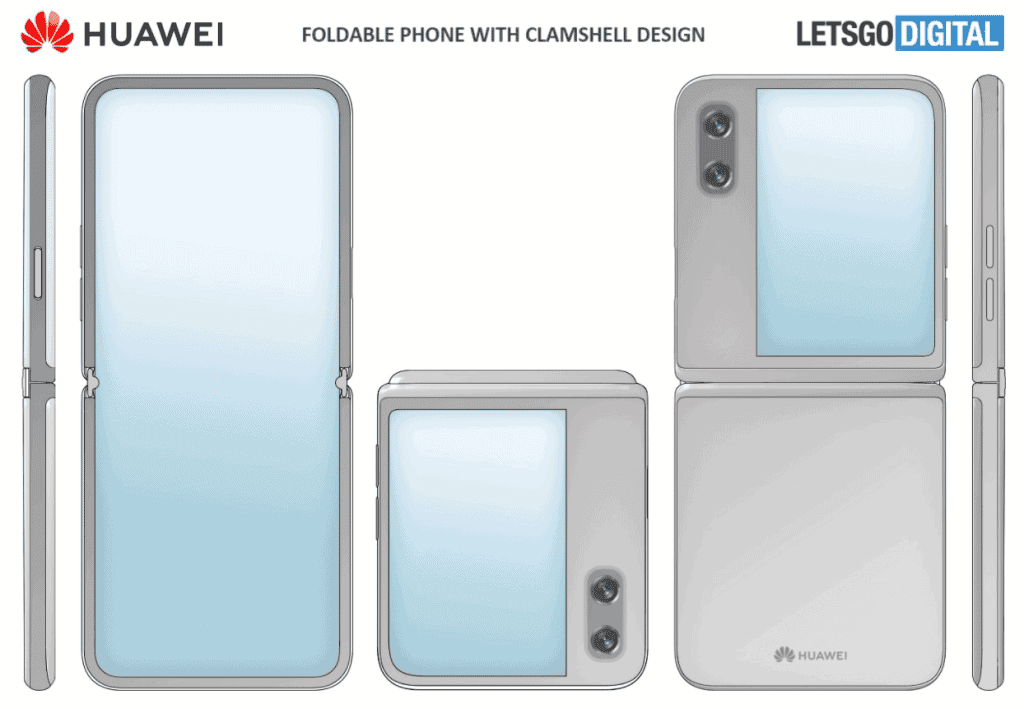 This Huawei 5G foldable phone has a relatively large cover display. A dual camera is visible next to the cover screen. These are also the only visible cameras on this phone model. When open, it has a really long and narrow screen. It is a full-screen design, no cutouts are visible for the camera. Huawei may want to equip this folding phone with an under-screen camera.

The hinge fits nicely into the case when the phone is fully open. When folded, the device also seems to close neatly. Two physical buttons are visible on the left side, most likely the volume buttons. In addition, a power button is integrated on the right side. Strangely enough, no USB-C connection, microphone, and/or speaker is visible in the images.

According to a reliable Weibo blogger @digitalchatstation, the next Huawei 5G foldable phone will adopt an in-folding design similar to Samsung’s Galaxy Fold. However, there is no official verification of this information. Also, Huawei currently has chip issues thus we can not be certain that the company will release more foldable phones. Huawei’s flashable phones use flagship chips. The company’s supply chain for these chips is compromised due to the U.S. ban.

It is very important to note that this is only a patent filing. There is no guarantee that Huawei will release such a foldable phone. Given the current situation, it is most unlikely that we will see any foldable phone from Huawei. However, we can not rule out the possibility of one in the future.