Samsung’s next flagship Galaxy S21 series has started appearing on various certification websites. Surprisingly, Samsung Galaxy S21 with model number SM-G991U has appeared on the NFC certificate too. There’s hardly any other information present along with the certification listing. Moreover, Verizon based variants of Galaxy S21 recently appeared on the Samsung community forums in South Korea. Although the smartphone will launch early next year. 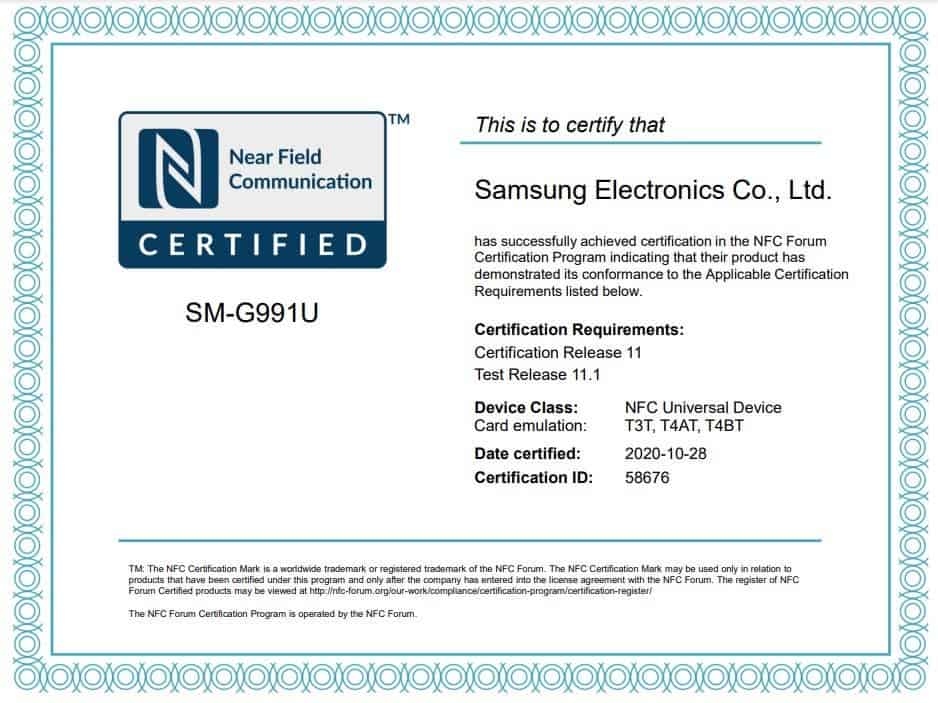 In recent reports, Samsung might ditch a charger or earphones in the Samsung Galaxy S21 box. The ongoing advancement is quite opposite with respect to the recent incidents which took earlier at the launch of the iPhone 12. The Samsung Caribbean Facebook Page recently took a dig at Apple for not including in-box accessories, and now the Korean giant is expected to do the same. We need to wait and watch before speculating anything as of now.

Moreover, the Galaxy S21 and S21+ charger were recently spotted on 3C certification confirming the battery details of both the devices. Samsung Galaxy S21 might carry a 3880 mAh battery while the Galaxy S20+ might consist 4660 mAh battery.

Some information related to the Verizon-based Galaxy S21 also appeared on the Samsung Korean community confirming the milli-meter 5g variant.

According to the various benchmark and certification websites, Galaxy S21 series will have a Qualcomm Snapdragon 875 SoC in the US and China. In other countries, Samsung’s next flagship devices will be powered by an in-house Exynos 2100 SoC. Samsung will launch three models under the Galaxy S21 series i.e. Galaxy S21, Galaxy S21+, and Galaxy S21 Ultra.

Galaxy S21 Ultra will feature a 6.8-inch Dynamic AMOLED 2X display. The phone will run on Samsung’s One UI 3.0 based on Android 11 out of the box. There will be a 108MP primary camera at the back and a 40MP front camera for selfies and video chats.

Recently, Samsung Galaxy S21 with model number SM G9910 passed through the 3C certification with a 25W fast charger. Moreover, the base variant of Galaxy S21 will have a 3880 mAh battery as said above.