Canalys recently released its report on the global and Chinese smartphone market. The global market report is the same as what Lei Jun announced today. Whether it is Canalys, IDC, or Counterpoint, it shows that Xiaomi is back to the top three globally. This is in terms of smartphone shipments. In the Chinese market, Xiaomi ranks fourth. On top of the list is Chinese manufacturing giant, Huawei. It is followed by Vivo and Oppo. American manufacturer, Apple, is fifth in the Chinese market. 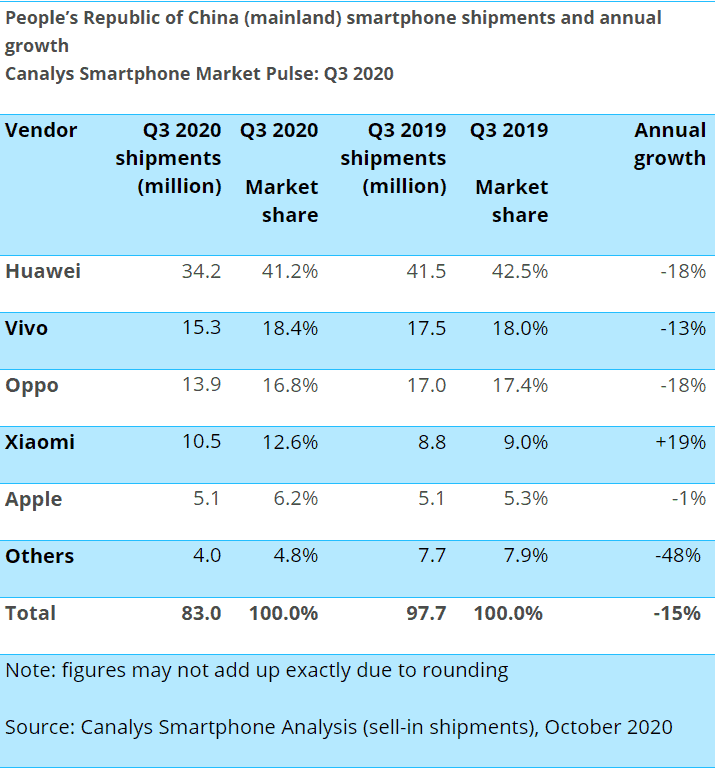 The top 5 smartphone vendors in China have a total market share of 95.2%. Their collective shipment is about 79 million units. According to Canalys’ analysis, the Chinese smartphone market dropped 8% from the previous quarter and 15% from last year. In Q3 2020, it recorded a total of 83 million units.

Although Huawei is still leading the Chinese market, its shipment fell for the first time since 2014. In the third quarter, it shipped 34.2 million mobile phones. Its market share fell from 42.5% in the same period last year and 44.3% in the previous quarter to 41.2%. 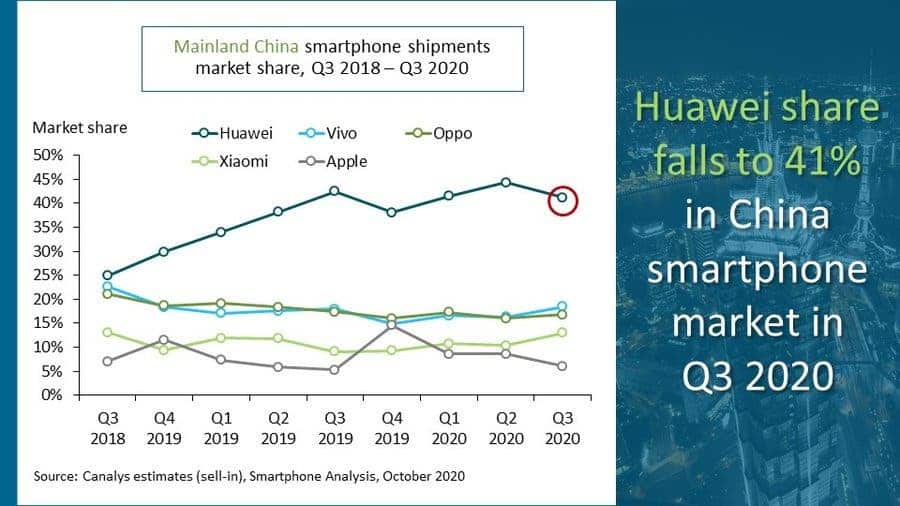 Likewise, Vivo and Oppo maintained the second and third places, but their shipments fell by 13% and 18% respectively. As the only manufacturer with growth, Xiaomi ranks fourth, achieving a year-on-year growth of 19%. The company shipped 10.5 million smartphones and narrows the gap with the top three.

Apple shipped 5.1 million iPhones, down 1% from last year. However, Apple actively reduced the inventory of older iPhones in the third quarter to make room for the iPhone 12 series in the fourth quarter. 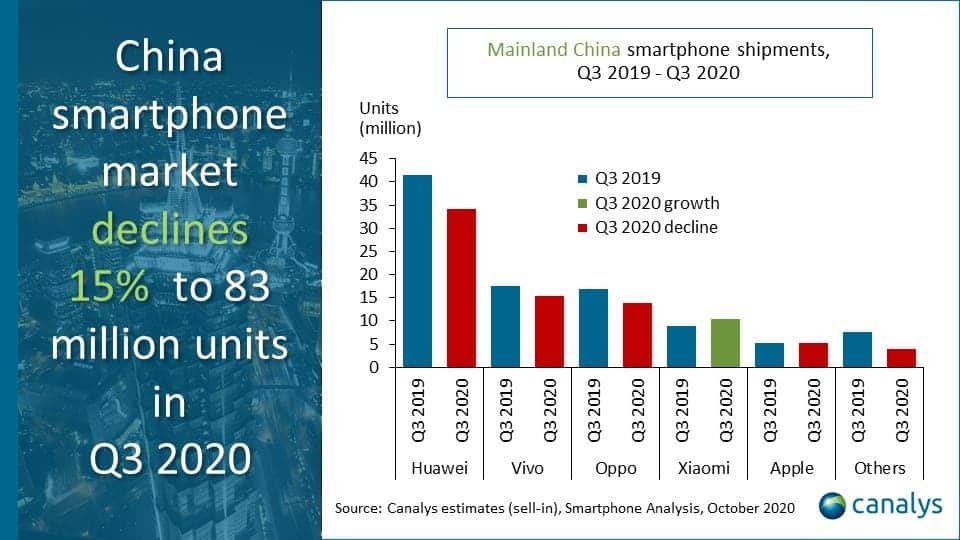 “The market decline is in line with our expectations,” said Canalys analyst Jia Mo. “Huawei was forced to restrict its smartphone shipments due to the ban imposed by the US Department of Commerce on August 17th. This created a partial channel vacuum to a certain extent. Other manufacturers have not been able to fill the vacancies immediately. Huawei is facing the most severe challenge since reaching the top of the domestic smartphone market in 2016. If the policy direction of the US government does not change, then Huawei will also try to change its strategic focus in China…”

“Although it failed to launch a new flagship iPhone in September this year, Apple avoided a sharper decline in the third quarter, mainly due to more people-friendly iPhone series products, such as iPhone 11 and iPhone SE,” Canalys Global Vice President Peng Luping said, “However, the new iPhone 12 series will bring changes to Apple’s development in China.

In the fourth quarter, as major manufacturers bring more new products to the market, 5G smartphone competition will also enter a fierce stage. “This also includes the Mate 40 series launched in China today.” Jia Mo added, “Huawei’s competitors will try to accelerate the filling of the channel vacancies left by it in the fourth quarter, and vie to take over Huawei’s advertising and retail sales.

Next iFixit: iPhone 12 camera cannot be replaced by third-party repairers