Canalys’ latest forecast shows that by 2021, shipments of smartphone accessory wearable devices and TWS headsets will exceed 200 million units and 350 million units, respectively. The new coronavirus epidemic has intensified globally. So consumers have turned their attention to accessories such as smart wearable devices and smart ear-worn devices.

Canalys believes that the two categories of wearable devices and TWS headsets will be more resistant to this epidemic than smartphones. Also, their shipments are expected to increase significantly at a rate of 32% in 2020. They will become market winners in Greater China and North America. Plus, these devices should show a good performance in Asia-Pacific and Europe. 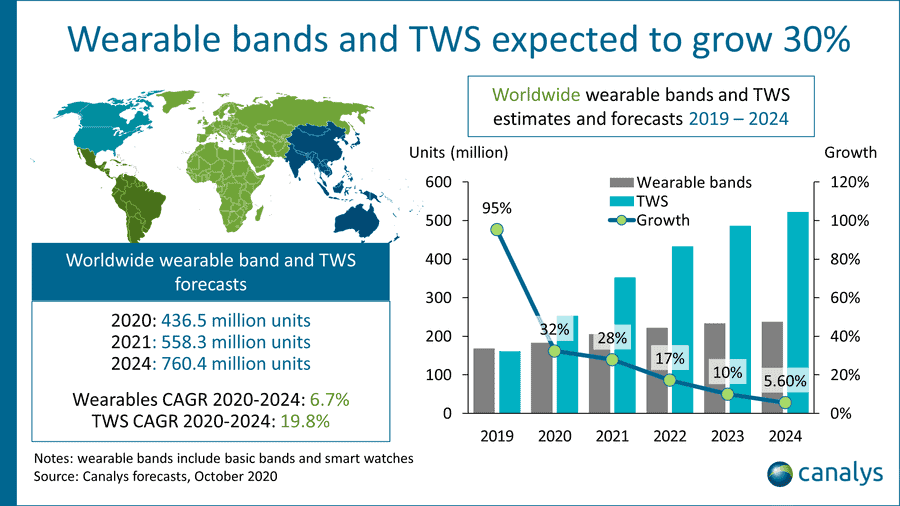 According to forecasts, a small number of categories will become strategic market winners in 2021. As you guess two of them are wearables and TWS headsets. Cynthia Chen, a research analyst at Canalys, said: ‘Consumers’ attention to health and wellness has increased significantly during the pandemic, which is a great opportunity for wearable devices, such as those from Xiaomi, Garmin, Fitbit and Huami etc. Engagement in indoor activities such as remote learning, working from home and home entertainment, as well as outdoor sports and recreation also continued to rise. This ushers in greater than expected growth, particularly for TWS headphones, such as those from Apple, Samsung, Jlab and QCY etc.’ In 2021, TWS headsets are expected to grow by 39% to over 350 million units. This is a much larger increase than wearable devices. Wearable devices are expected to grow by 12% in the same year.

What About Traditional Smartphone Makers?

Chinese smartphone manufacturers are also looking overseas. They hope that the two categories of wearable devices and TWS headsets will gain growth opportunities in overseas markets. Chen added: ‘Despite the likelihood of needing more time to recover from the pandemic, Southeast Asia nations are attractive due to its large population base and proximity to China. Some Chinese players that already have well-established channels. They are leveraging cross-border e-commerce platforms to reach users and shipping devices directly from China or Hong Kong. Chinese players are well poised to offer more choices. This especially true for affordable and appealing devices. They resonate well with local users. They are expected to play a big part in pushing the overall APAC region to surpass North America. Thus, they will become the second-largest region for wearable bands and TWS headphones in 2024.’ 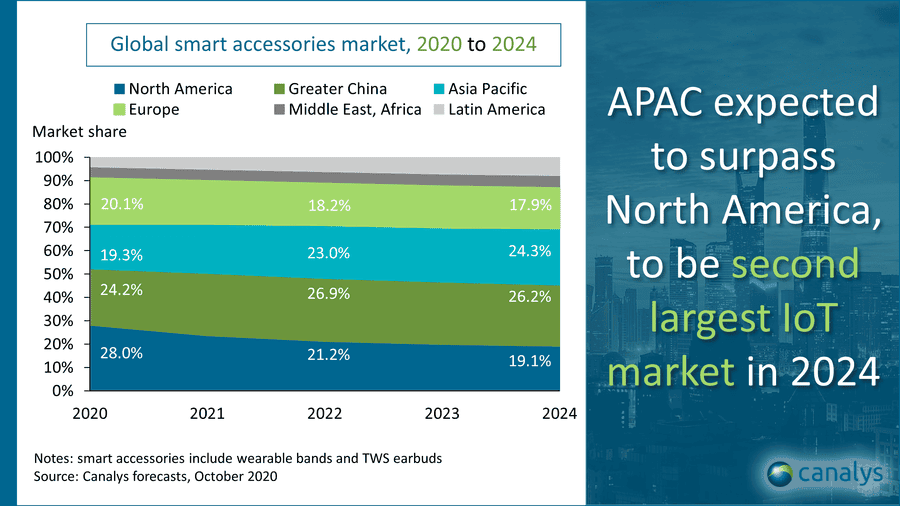 At the same time, the Canalys report believes that manufacturers still need to maintain a high degree of vigilance. Otherwise, they can’t prevent subsequent infections that may affect their IoT expansion plans. Chen added: ‘While users are expected to tighten their spending, they continue to demand devices to do even more and provide an excellent user experience. The challenge here is to bring incremental upgrades to ever more affordable devices. At the same time, they should ensure seamless integration that must translate to valuable features. The latter will help users in areas such as wellness and smartphone entertainment.’