Two years ago, ZTE was in a complicated situation due to an unprecedented ban imposed by the United States. The Chinese firm violated some sanctions imposed against Iran and had to deal with the consequences of a ban that prevented it from using hardware or software made or developed by the United States. Unlike Huawei, ZTE hadn’t the same amount of resources to sustain itself in the market and almost closed its doors. A couple of months after this ban, the company found an agreement with the United States government. After a series of changes, ZTE was back on the market. Nowadays, the company is back with competitive and innovative devices like the world’s first in-display selfie camera smartphone. The company also wants to diversify its range of 5G devices and the ZTE Blade X1 5G may be the answer to this.

Today the upcoming device passed through the Global Certification Forum (GCF). As usual, these certifications hints at a very close launch for these devices. The ZTE Blade X1 5G was spotted on the GCF certification with the Z6750M model number. The device already passed through Wi-Fi Alliance certification with the very same model number. According to the listing, the phone comes with Android 10 straight out of the box. Well, this is just the bare minimum nowadays, after all, Android 11 is already there. Apart from the software, the phone comes with support for 2GHz / 5GHz dual-band Wi-Fi and Wi-Fi a/b/g/n/ac technology. 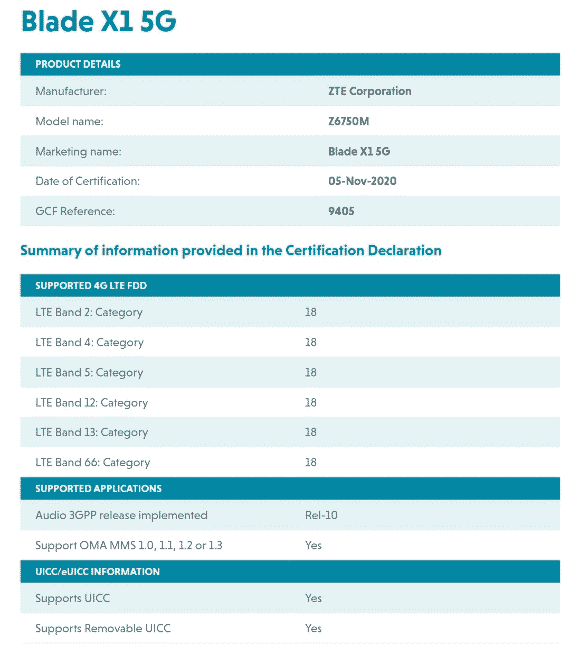 The phone comes to fill the gap left by the original Blade X which was released back in October 2017. While the original phone came with budget low-end specifications, the Blade X1 will belong to the mid-range specifications, well there aren’t many 5G chipsets in the mid-range segment, so guessing which chipset will be present here isn’t rocket science. We would bet in a MediaTek Dimensity chipset, maybe from the 800 series, or even the recently released 720. Unfortunately, ZTE is yet to give us an official confirmation or hint about the device’s arrival. However, considering the number of details and the certification processes that the device has passed through, we believe that its launch is imminent.

Considering the wave of leaks popping out, this surely won’t be the last time we hear about the ZTE Blade X1. If you’re particularly interested in this upcoming 5G device, then stay tuned for more.