The year 2020 will be remembered by OnePlus and its fans. Of course, we’re not talking about the pandemic that ravaged the world during the past months. We are talking about OnePlus expansion as a smartphone brand that ships more than just premium devices. This year, OnePlus introduced the OnePlus Nord as its first mid-range smartphone in years. Back in the last month, we got the confirmation that “Nord” stands for a series of affordable OnePlus devices. The company introduced the OnePlus Nord N10 and Nord N100.

The former is a cheaper 5G smartphone, while the latter is a budget-friendly device, the first one released by OnePlus. During the launch, the Chinese firm didn’t expose its plans regarding global availability. Now, an Asian variant of the device has been spotted on GeekBench. This brings the possibility of an Indian launch. 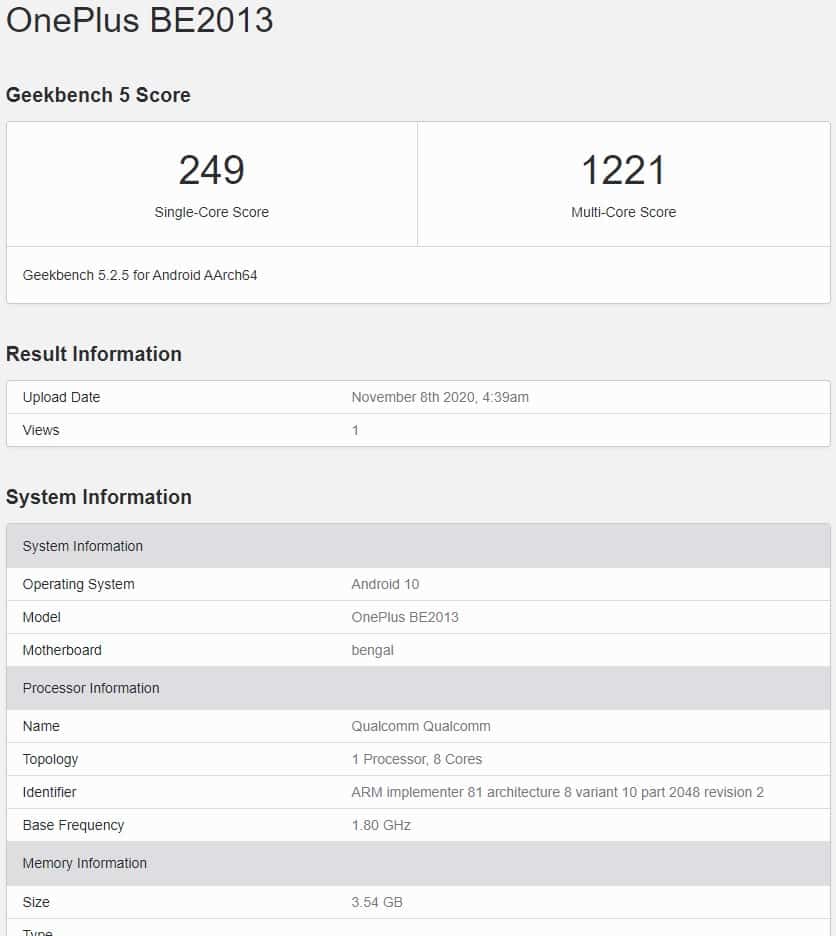 It’s not a big surprise to see that OnePlus is targeting the Indian markets as well as other markets in Asia. The Chinese firm has been building a solid user base among these markets, and talking about India, once again, it’s one of the biggest strongholds for OnePlus phones. The company has established a solid presence there as a premium smartphone brand. Moreover, the original Nord is also performing well there. For that reason, we can see that the OnePlus Nord N100 is a device that really makes sense in one of the biggest markets for smartphones.

The N100 appeared on GeekBench with model number OnePlus BE2013. Interestingly enough, the very same model number was spotted before on Thailand’s NBTC certification process. This another strong hint of an Asian launch in the coming weeks. For now, the company needs to give an official confirmation about it. However, OnePlus is well known for teasing its launches.

The Nord N100 flaunts a Snapdragon 460 SoC. This is a solid entry-level Octa-Core with at least four Cortex-A73 cores ensuring strong performance. The device brings 4GB of RAM and 64GB of Internal Storage. Moreover, we have a microSD card slot for further memory expansion, a feature that isn’t common among OnePlus phones.

The device flaunts a 6.52-inch HD+ LCD with 1,600 x 720 pixels of resolution and an aspect ratio of 20:9 aspect ratio. This panel brings a top-left aligned punch-hole comprising an 8MP selfie snapper. Moving around to the back we have a Triple-Camera setup comprising a 13MP primary, a 2MP macro, and a 2MP bokeh lens.

The device brings a huge 5,000mAh battery with 18W fast-charging. Other features include Bluetooth 5.1, 4G LTE, and a 3.5mm headphone jack. On the software front, we have OxygenOS 10.5 based on Android 10.

Next IR thermometer KKMOON and more discounted for 11.11