Lu Weibing, President of Xiaomi Group China and General Manager of Redmi Brand, posted a warm-up poster on Weibo today. The poster is to get consumers prepared for Xiaomi’s upcoming 11.11 sales. Technically, the message reminds people that it’s just two days before the massive sales from Xiaomi. However, it also comes with the phrase “November will be exciting”. Ordinarily, November is an exciting month because of the Chinese sales. However, there are speculations that Lu Weibing is hinting towards the arrival of the Redmi Note 9 series in China. 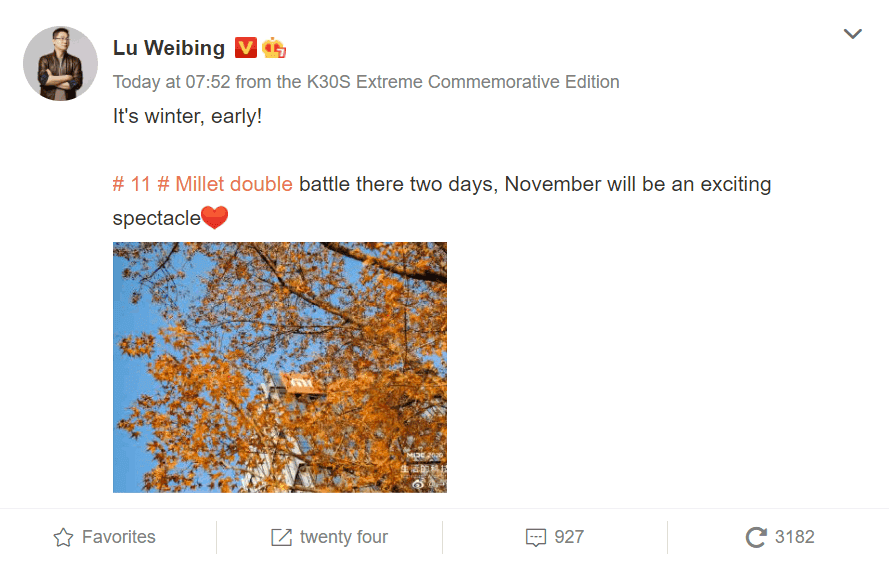 Many people are confused because Redmi already released the Note 9 series globally back in May. However, the company did not release these devices in China at the time. Now, Redmi is getting set to unveil the Redmi Note 9 series in China and it comes with significant changes. From the design to the hardware, this device is different from the global version.

According to leaks, this series will have two smartphones, a regular model and a high version. According to @DigitalChatStation, the regular version of this series will come with a 6.53-inch display which has a 2400 x 1080p resolution. The display will have a single punch-hole screen in the upper left corner. We will also have a 13MP front camera as well as a 48MP main rear sensor in a Cantonese matrix triple camera setup. This device will come with a Dimensity 800U processor as well as a 5000 mAh battery that supports a 22.5W fast charge.  The Redmi Note 9 regular version will have a dimension of 161.96 × 77.25 × 9.20mmm weighing 200g. ​​​​

As for the Redmi Note 9 high version, here are what we should expect

This Redmi Note 9 high version (probably Redmi Note 9 Pro) will be the first smartphone to use the Snapdragon 750G processor in China. The 100-megapixel Samsung HM2 sensor is 1/1.52 inches in size, with a unit pixel area of ​​0.7μm, and supports 9 pixels in one (equivalent to 2.1μm). It is worth mentioning that Redmi previously released the Note 9/Pro series outside China. However, the Chinese version will be very different from the global version.