In October, Samsung officially confirmed the imminent release of the affordable Galaxy A42 5G smartphone. Many specs of the upcoming smartphone has became known, including a 6.6″ AMOLED display, 6/128 GB of memory, a 5000 mAh battery with 15 W charging. But the main question remained without a specific answer – what will the SoC of this model be? The answer to this is now revealed. 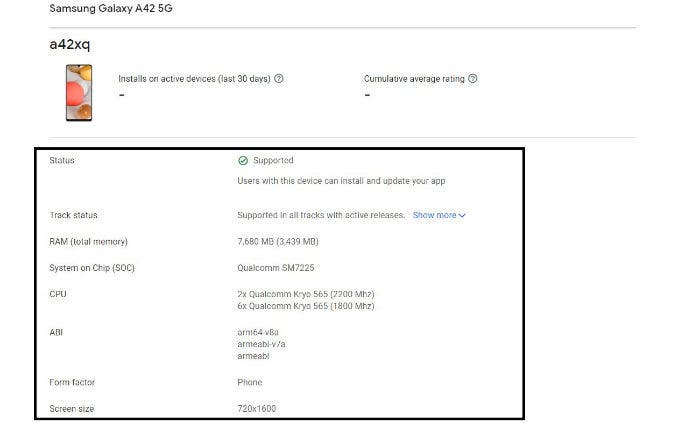 The Google Play Console has published information that the Galaxy A42 5G will receive a Snapdragon 750G, thereby confirming the previously published rumors. It also says about an HD+ display with an aspect ratio of 20:9, as well as 8 GB of RAM (obviously, the bigger version The smartphone is expected to go on sale in Europe for 370 euros (about $438), but the exact release date is still unknown. 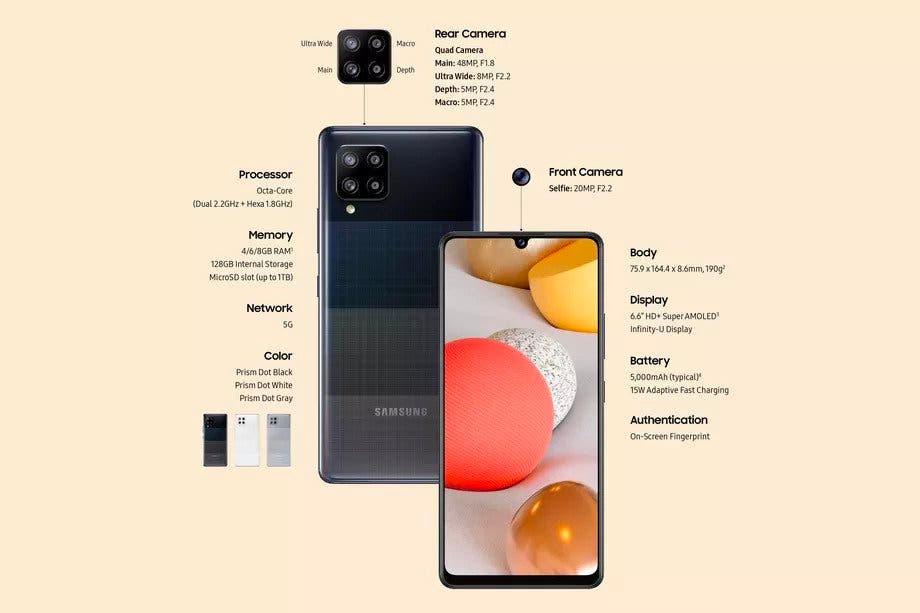 As per recent leaks, the Galaxy A42 5G flaunts a 6.6-inch HD+ Super AMOLED panel with a waterdrop notch and an in-display fingerprint scanner. Under the hood, the handset comes with an Octa-Core chipset with 5G capabilities. It is said to come in three distinct flavors with 4GB, 6GB, and even 8GB of RAM. Storage-wise, it should start with 64GB and go up to 128GB. Of course, it will support microSD card expansion. The phone will have a waterdrop notch serving as a house for a 20MP selfie camera with f/2.2 aperture. Moving around to the rear, we have a square-ish Quad-Camera setup. It comprises a 48MP primary, 8MP ultrawide lens, 5MP depth, and a 5MP macro shooter. The phone will draw power from a 5,000mAh battery and is said to support 15W fast-charging. We’re disappointed to see that a phone with 5G and a somewhat premium price tag can’t even have 18W fast-charging. It obviously ships with Android 10 and One UI 2.1 on top.

The new 5G smartphone contender will hit the shelves in the United Kingdom later this month. As aforementioned, the device will retail at around USD 438. In fact, the Galaxy A42 will come as Samsung’s cheapest 5G smartphone. It should play this role until the company decides to unveil a 5G handset under the Galaxy A3x series or even under the Galaxy M series. The A42 5G will be available in three colorways Prism Dot Black, White, and Gray. The device will join the likes of Galaxy A51 5G and A71 5G. For now, Samsung’s offer of mid-range 5G handsets is rather limited, but we may see an improvement in the coming months.