Motorola may not be the most exciting smartphone brand in the market neither it has the most exciting devices nowadays. However, the company recently upgraded its game with better specifications for its mid-range phones. The company gave a step further in the segment by introducing the first Moto G phone with 5G connectivity. While the Moto G9 series is pretty much composed of brand new devices, the company seems to be working on the next generation already. Earlier this month, we saw some reports about the Moto G10 Play. Now, the device appeared in the Geekbench listing with some of its key specifications.

According to the GeekBench platform, the aforementioned device described as Motorola Moto G Play (2021) comes with 3GB of RAM and ships with Android 10 straight out of the box. We assume that this is just a test unit. After all, there’s no reason for not shipping a new phone without Android 11. After all, Motorola devices ship with a close to vanilla Android. Unfortunately, the listing does not mention the chipset name, however, the source code of the page reveals Adreno 610 GPU. According to the report, this may the Snapdragon 610 SoC.

The Moto G Play (2021) scored just 254 points in the single-core test and 1,233 points in the Multi-Core test. Our impressions here are quite mixed. Well, there are plenty of chipsets nowadays that can offer performance at a low price cost. The Snapdragon 460 or some of the Helio G chipsets probably would be a better option. According to the FCC database and TUV Rheinland certifications, the Motorola Moto G10 Play will come to the market with an XT-2117 model number. 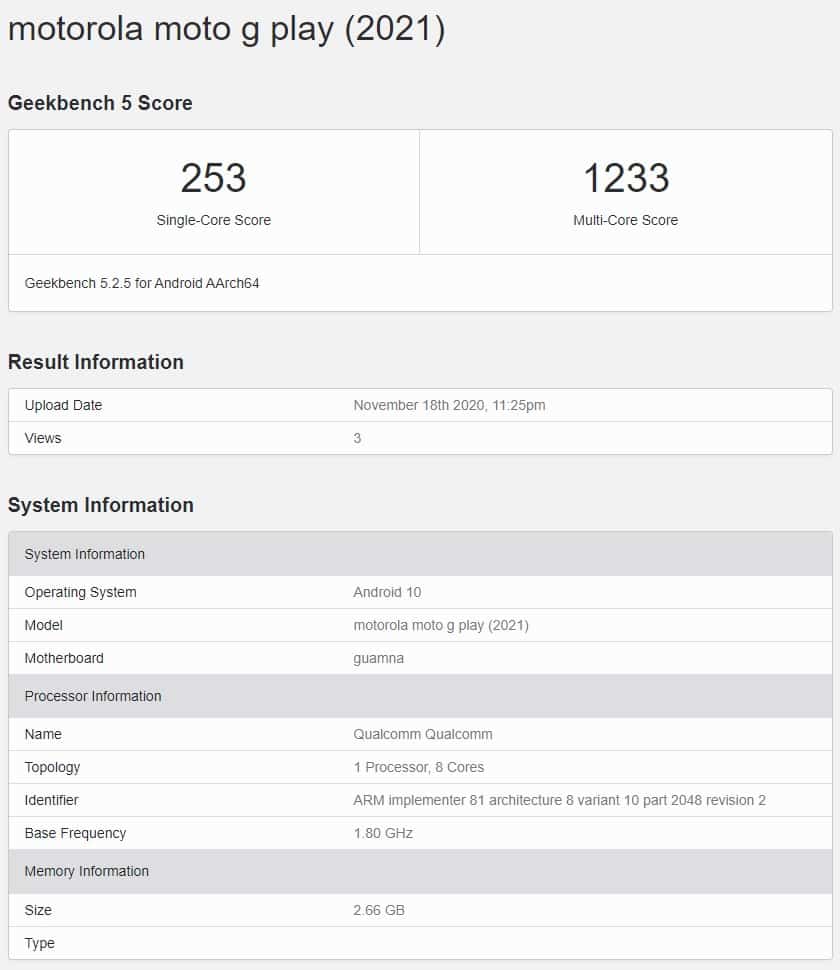 The reliable leaksters from OnLeakes already shared some of the key details of the Motorola XT-2117 aka Moto G10 Play. According to the report, the phone will have a Square-shaped camera module. Apparently, this is a new trend in the world of smartphone designs and companies will take a long time to leave this solution. The phone has three sensors and an LED flash. On the front, we have a punch-hole display with a 6.5-inch diagonal. The handset measures 165.3 x 75.4 x 9.5 mm and a 4,850mAh battery. Hopefully, the phone will also ship with a USB-C port and fast-charging capabilities.

As we mentioned before, this must be a testing unit as the device still is some months away. We expect more details to surface in the coming weeks.