Redmi is on the verge of launching a new Note 9 series device – Redmi Note 9 5G on November 26. It will feature various improvements over its younger siblings like Redmi Note 9 and Redmi Note 9 Pro. Along with the new smartphone, the company appears to be launching a new wearable device which is highly likely to be the Redmi Watch. Redmi General Manager Lu Weibing is actively teasing the debut smartwatch by the company. He is also hosting the talk show on the launch day to detail about the new products. 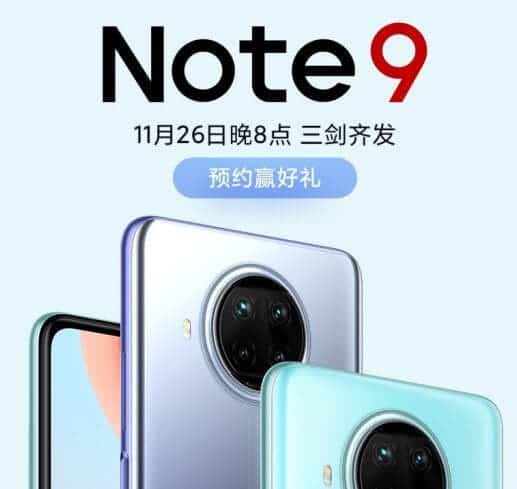 Redmi is launching the Remi Note 9 5G on November 26 in China at around 20:00 Beijing Time. Redmi Watch is expected to feature a 1.41-inch touch display and other competitive specifications.

The Mi Watch Lite FCC listing also confirmed the presence of a 230 mAh battery, and compatibility with Android and iOS devices. The user manual on FCC also showcases information about its features such as Built-in GPS, Multiple Fitness Modes, Screen Auto-Brightness, and 24-hours heart rate monitoring. Moreover, the Water Resistant Certification of up to 50 meters and Swiming Stroke recognition is present. It could be the upcoming Redmi Watch launching alongside the Redmi Note 9 5G.

Redmi is teasing the launch of three new products, but haven’t confirmed yet about respective details of any device. We have to wait for the official launch which is scheduled for Overmorrow. You can know more about speculated features of Remdi Note 9 5G below.

According to various certifications and leaks, the company will launch a couple of new 5G-ready Note 9 series smartphones in China. These smartphones will come with Qualcomm Snapdragon 750G chipset bundled with up to 12GB RAM and 256GBinternal storage. Moreover, the Note 9 Pro 5G will come with a 6.67-inch FHD+ display. There will be a quad-rear camera featuring a 108 MP primary sensor.

The standard version will come with Dimensity 800U, up to 8GB RAM, and 356GB internal storage. There will be a smaller 6.53-inch LCD panel.