Recently, Samsung Galaxy A02 entry-level mobile phone recently passed the certification of the CPQD R&D Center in Latin America. The battery capacity of the machine was exposed. The machine will be equipped with a 5000 mAh battery. This is an increase of 2000 mAh relative to the previous generation. Two months ago, there were reports that Samsung is developing the Galaxy A02.

The previously exposed specifications of the Samsung Galaxy A02 include 32GB/64GB of built-in storage and 2GB of RAM. The phone will run Android 10 operating system. It will most likely be equipped with Qualcomm Snapdragon 450 chipset, support 10W or 15W fast charging, and use a 13MP dual camera.

The Samsung Galaxy A01 was released in January 2020, so Galaxy A02 may be released at the end of this year or early next year. According to speculations, the price of this phone should be below  $200. 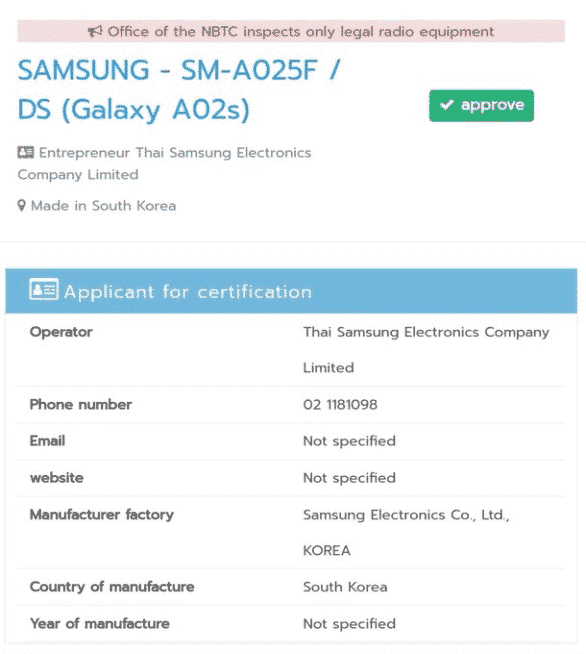 Unfortunately, Thailand’s NBTC certification fails to give deeper details about the handset. However, the device passed through the GeekBench benchmark and it reveals some tidbits about its internals. First of all, the handset packs a 1.8GHz Octa-Core Qualcomm chipset. While the chipset name is unknown, it is most likely the Qualcomm Snapdragon 460 SoC. This is an excellent chipset, even for the low-end segment. It packs four Cortex-A73 cores. The handset processing power is paired with 3GB of RAM. The phone scored 756 points in the Single-Core tests and 3,932 in the Multi-Core department. Those results are quite high, but worth noting that this was taken on GeekBench 4.x which has higher scores than the 5.x platform.

It’s interesting to see 3GB of RAM here, but not a big surprise. Starting in November, Google will require 2GB RAM phones to run Android Go. Samsung probably does not want its budget device to come without One UI. After all, the Snapdragon 460 SoC can run stock Android 10 without problems. We’ll probably see more variants with extra storage at the launch. The Storage should start at 32GB, but of course, the device will bring microSD card support. Other rumored specifications include a 5.7-inch HD+ waterdrop notch display. It is likely coming with a dual-camera setup at the back with a 13MP primary camera and a 2MP depth sensor. In connectivity options, the phone packs GSM/WCDMA/FDD-LTE, WLAN 802.11 b/g/n, WiFi-Direct, and Bluetooth V 4.2. However, all the other specs are still unknown.

Samsung is yet to confirm the Galaxy A02s arrival. However, the device already passed through several certification departments like NBTC and Bluetooth SIG. Considering the number of certifications popping out, we assume that the device’s launch is not too far from here, maybe in November.