The year 2020 has been quite remarkable for OnePlus as a smartphone company. The brand now is more than just a premium flagship maker as it has entered the mid-range segment in July with the release of the first OnePlus Nord. Back in the last month, the company aspirations to become a mainstream smartphone maker became evident with the launch of the OnePlus Nord N100 and the N10 5G. Of course, the company also established its name, once again, in the high-end segment, with the release of the OnePlus 8T. Now, the company seems to be focusing in the next year that will introduce the OnePlus 9 series. However, there will be a device dubbed OnePlus Nord SE in Q1 2020. 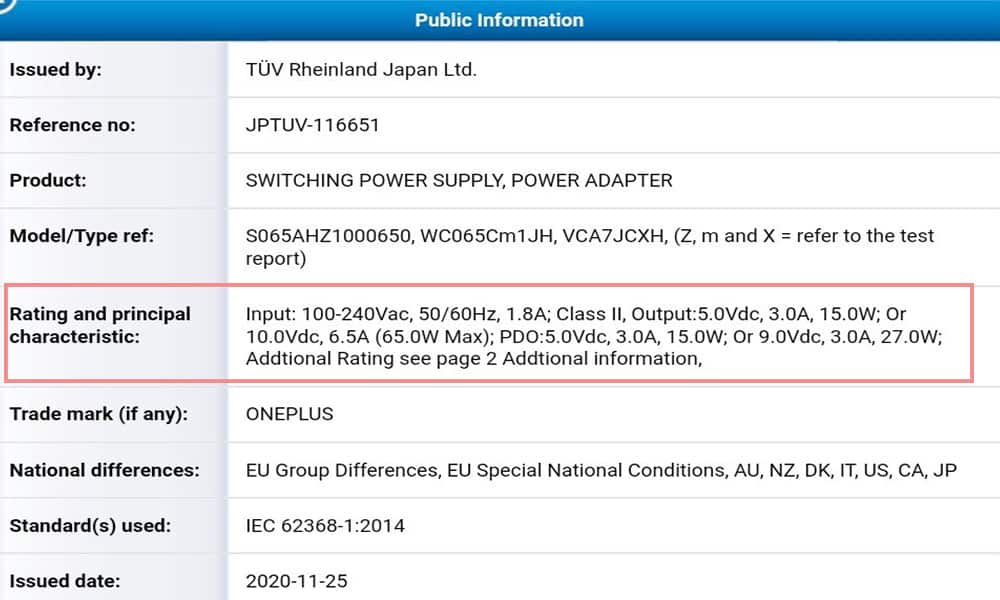 The OnePlus 8T does not bring many differences in terms of performance. However, it does innovate with a new 65W fast-charging. This technology is being shared by some companies in the BBK Group such as Realme and Oppo. It seems to be a new standard for OnePlus smartphones now, at least, the ones reaching the higher spectrum of the brand. Today, a new OnePlus 65W fast-charger appeared on TUV certification. According to the TUV Rheinland listing, the charger outputs multiple charging rates: 5.0V/3.0A (15W), and 10.0V/6.5A (65W). New rumors state the company’s next handset the OnePlus Nord SE will pack a 65W fast charger.

According to a report from Android Central, OnePlus Nord SE will arrive as a budget-friendly smartphone that will introduce some improvements in comparison to the Nord. The device will draw power from a 4,500mAh battery complete with 65W fast-charging. Under the hood, the phone will still bring the Snapdragon 765G which comes as a disappointment. After all, rumors state that Qualcomm will unveil the Snapdragon 775G as an upgrade in the next month. We expect a better chipset at the very least as the device will still come with a 90Hz display.

Unfortunately, we don’t know exactly when the OnePlus Nord SE will be unveiled. So reports point to March 2021 launch. The device may go official alongside the OnePlus 9 series that will also come a bit earlier this year. In fact, OnePlus planned the original Nord to go official along with the OnePlus 8 family. However, due to the COVID-19 pandemic the company had to change its plans.