The year is almost closing, but smartphone makers are trying their best to bump the Q4 2020 sales with last-minute launches. Oppo is reportedly preparing for the launch of its Reno 5 series in China. The new smartphone series will bring a vanilla Oppo Reno 5 5G and an Oppo Reno 5 Pro 5G. Both devices have been circulating through the rumor mill recently. The vanilla model already paid a visit to 3C certification with model number PEGM00 and PEGT00.

According to the 3C listing, the device will bring 65W fast-charging support. This kind of charging seems to be a tendency for devices in the BBK group. Realme released its Realme 7 Pro and X7 Pro featuring this charging capability, OnePlus followed with the OnePlus 8T, now it’s time for the Reno 5 series to come with this crazily fast-charging tech. The device is set to come in Starry Dream, Aurora Blue, Moonlight Black, and Star Wish Red colors. Today, an alleged photo popped out in the web revealing the Oppo Reno 5 5G in its Aurora Blue colorway. 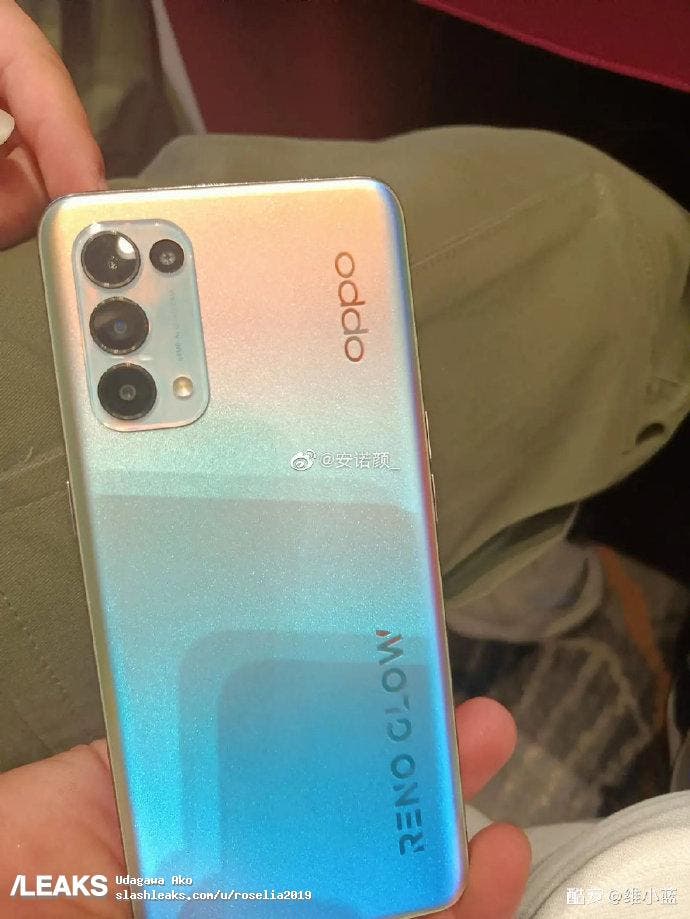 Although we need to recommend the usual pinch of salt, we have to say that this image is perfectly on par with the leaked renders of the Reno 5 series. It shows the rectangular camera island comprising the Quad-Camera setup and a LED flash. Well, there is something written in the cutout and if my eyes are failing me it says 64MP AI camera. But digest this with a pinch or two of salt, after all, the resolution isn’t helping us here.

On the top right part, we have the vertically aligned Oppo logo, while the bottom serves as a house for “Reno Glow” branding. Well, it seems that Oppo is borrowing the big logos that Realme introduced with its Realme X7 series. At least it does not come with a massive “DARE TO LEAP” logo here. I’m sorry Realme fans… As for the color, well it does look like Aurora Blue to me, we have a predominantly blue color in the bottom part that reaches pink tones in the top thanks to the Gradient effect.

Read Also:  Oppo A57 Price In India, Key Specs Tipped Ahead Of Launch

In the end, the Reno 5 series seems to be quite similar to the Reno 4 series. So if you have been waiting for a major design overhaul, you’ll be disappointed.

According to previous leaks, the vanilla Reno 5 5G will boast the Dimensity 800U chipset. There is no info regarding the amount of RAM and storage available, but we assume that the device will start with 6GB of RAM and 128GB of Storage. The Reno series isn’t made of affordable devices, so we assume that 4GB isn’t enough anymore for a device of this level. Of course, this is just an assumption at the moment.

The phone will pack a 6.43-inch AMOLED display with a top-left aligned punch-hole for the selfie snapper. Moving around to the back, we have a Quad-Camera array comprising a 64MP primary, 8MP, 2MP, and 2MP camera sensor.

The phone draws power from a 4,300mAh battery with 65W fast-charging. We probably have dual 2,150mAh batteries here to withstand the 65W charging rates. The phone runs Android 11 straight out of the box with ColorOS 11 running on top. The device has 159.1×73.4×7.9 mm overall dimensions.