SensorTower, a well-known mobile application data analysis company, recently shared its top 10 apps in terms of downloads and revenues. According to the company, the non-gaming app with the highest global revenue in November is WhatsApp. After many months of TikTok’s (including Douyin) dominance, WhatsApp finally overtakes TikTok.  This popular messaging app has a total of 58 million installs. The country with the most Whatsapp installs is India with 30%. African giant and the most populous black nation with almost 200 million population, Nigeria,  is second with about 10%. Apparently, WhatsApp is very popular in sub-Saharan Africa. 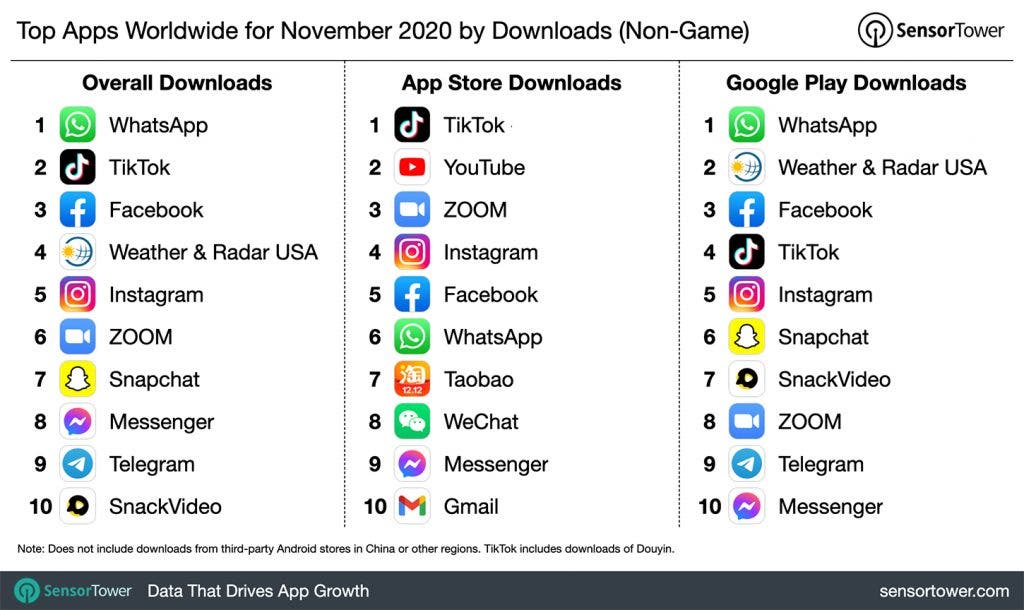 TikTok (including Douyin) is in the second position. These companies attracted more than $123 million in the global App Store and Google Play. This is about 3.7 times that of November last year. However, about 85% of revenue comes from the Chinese version of Douyin. The US market ranks second contributing 8% of revenue while the  Turkish market is third with 2% revenue. In terms of downloads, it has about 55 million downloads in November.

Facebook is the world’s third-highest most downloaded non-gaming application in November 2020. For the first time, Zoom is out of the top 5 rankings and it is replaced by Weather and Radar USA which ranks fourth above Instagram in fifth.

Read Also:  WhatsApp is working on setting up 3D avatars for video calls

It must be noted that the estimates for app downloads use official figures from the App Store and Google Play worldwide between November 1, 2020, and November 30, 2020. This does not include Apple and Google’s pre-installed apps. The figures also represent aggregate installs of all app versions, ex: Facebook and Facebook Lite.