After the official launch of the Snapdragon 888, a couple of manufacturers officially confirmed that they will use this chip. OnePlus is one of these companies. The OnePlus 9 series is expected to come with this chip early next year. However, we are still getting speculations regarding this device. A schematic sketch of the OnePlus 9 Pro shows that it comes with two really large rear sensors. This makes it feel like the remaining sensors are just making up the numbers. Thus, technically, many believe that the OnePlus 9 series will come with two sensors on the rear.

Presently, Liu Zuohu, OnePlus founder has begun to intensively warm up the company’s first model for next year. Of course, this is the OnePlus 9 series and we have more information about this phone. The new OP9 series will include at least two models – OnePlus 9 and OnePlus 9 Pro. It uses a very popular matrix camera module. This module includes two large sensors and a small sensor making up the triple rear camera setup. It will also come with an LED flash.

There are also reports that this series will also use a dual main camera setting similar to OnePlus 8 Pro. However, we expect the specific parameters to be better on the OP9 series. Recently, some unofficial renders of the OnePlus 9 hit the web. This latest render is consistent with previous reports. However, it comes with a pure white body which is very delicate and elegant. 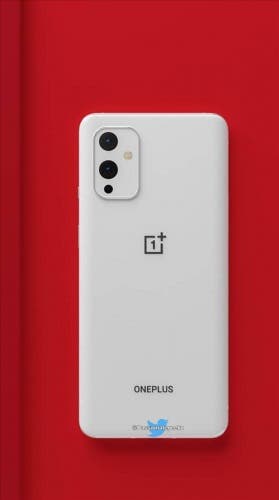 In addition, the OnePlus 9 will also support 65W flash charging and 40W wireless charging. Furthermore, we also expect dual stereo speakers on the OP9 while the OP9 Pro will also introduce IP68 dust and water resistance. According to reports, the new OnePlus9 series will arrive around March next year.