OnePlus‘ OxygenOS has been sitting as one of the fan-fav Android skins for smartphones. The software emerged as a quick solution after the demise of CyanogenOS. It evolved in several forms over the past few years, some changes came for the best, while others came for the worst. OxygenOS 12 was a target of criticism due to the massive changes that made it look more like ColorOS. In fact, OxygenOS always trilled a path close to stock Android, but that has changed. With OxygenOS 13, OnePlus tries to unite the best of both worlds.

After rounds of testing with the OnePlus 10 Pro, the company rolled out the stable update for the flagship. There are other several modules running beta builds, but the future is promising. The company has revealed the OxygenOS 13 update roadmap, revealing when exactly some phones will get the update. Worth noting that the OnePlus 9, 9 Pro, 10R, 9RT, 9R, OnePlus 8, 8 Pro, and 8T are all in the beta testing program. The update will soon reach the OnePlus Nord 2T 5G, and the Nord CE 2 Lite 5G. These devices are among the main Nord entries of 2022.

In the first half of 2023, the company will start the OxygenOS 13 beta testing phase for the OnePlus Nord CE 2 5G, Nord 2 5G, and Nord CE 5G. Worth noting that that are several other Nord series phones, but it’s unclear whether they will get the update. 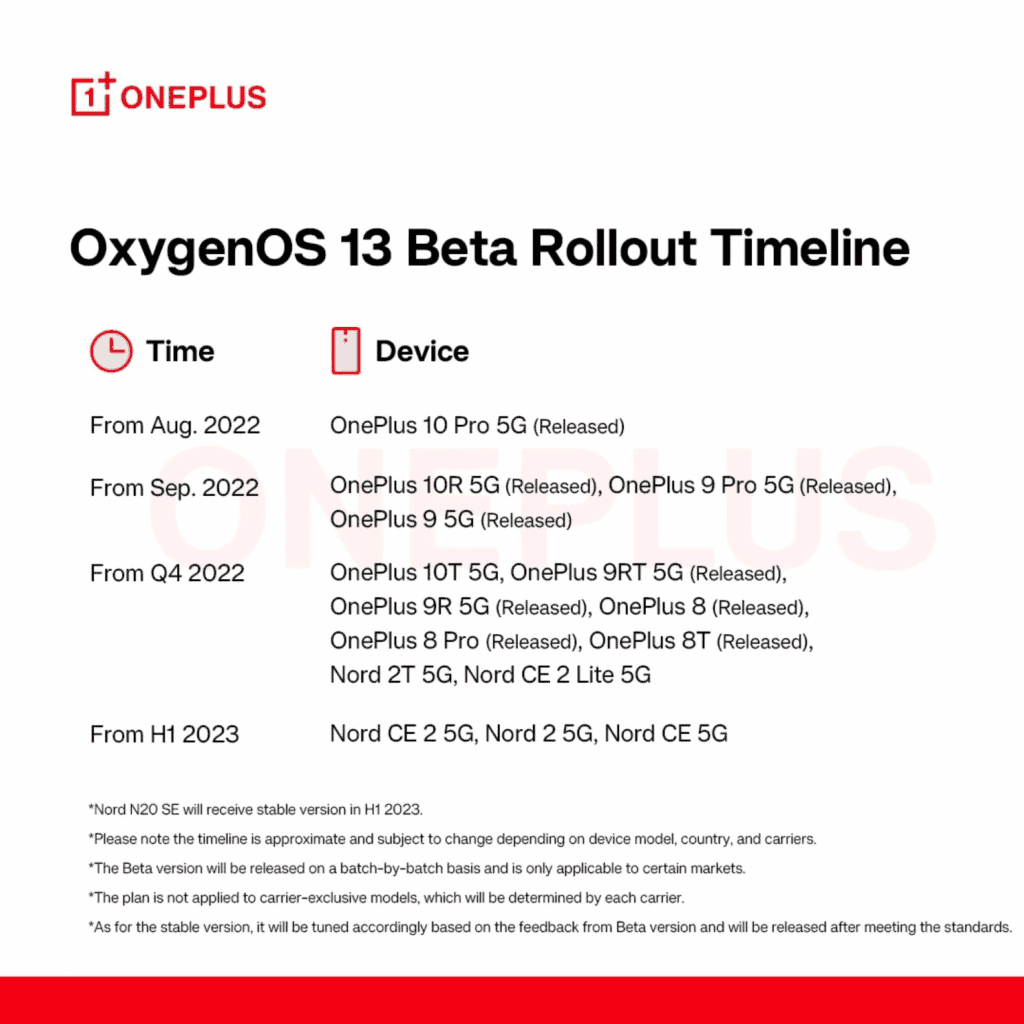 Unfortunately, OnePlus’ changelog has been rather vague. When asked about the arrival of these updates, OnePlus states that it will take longer as it takes. So we can expect multiple iterations of beta testing before a stable release.

Worth noting that the Chinese version of some OnePlus phones runs ColorOS 13 instead of OxygenOS 13. There are some relatively-new OnePlus Nord phones that aren’t on this list. So we assume that the company is not going back to its word of providing only one major update for some phones. Curiously, the recently released OnePlus Nord N300 arrived with OxygenOS 13 straight out of the box. So it may still be eligible for one update.

Previous Huawei begins a battle with Amazon over patent infringement

Next Apple halts advertisement of gambling apps on App Store