Lenovo was once one of the most relevant smartphone brands in China thanks to a plethora of competitive smartphones under its Lemon series. The brand also brought interesting and relevant smartphones like the ZUK series. However, in recent years, the company shifted its focus totally to the Moto series. After all, the old brand has a bigger influence and presence outside of China. Well, despite the successful road traced with the Motorola brand, Lenovo wants to sell more of its products. For that reason, the company will bring its Lemon brand back to life in China. Now, a new report indicates that the company is also preparing a new tablet for release. This tablet seems to be an affordable option for those who didn’t give up Android-powered tablets.

Android 11 and just 2GB of RAM

An unreleased Lenovo tabled passed by GeekBench Benchmark with model number TB-7306F model number. For now, there’s no clue about this device’s marketing name. However, as we mentioned above, this may be a device sold in an affordable level. According to the benchmark listing, the device comes with 2GB of RAM and Android 11 straight out of the box. What is unclear is whether this a full-fledged version of Android 11 or Android 11 Go. A couple of months ago, Google announced that companies launching 2GB RAM phones after November would need to use Android Go Edition rather than the stock version. The search giant didn’t make an official announcement for Android 11 Go yet, for that reason, it’s impossible to determine which version the Lenovo tablet will pack. 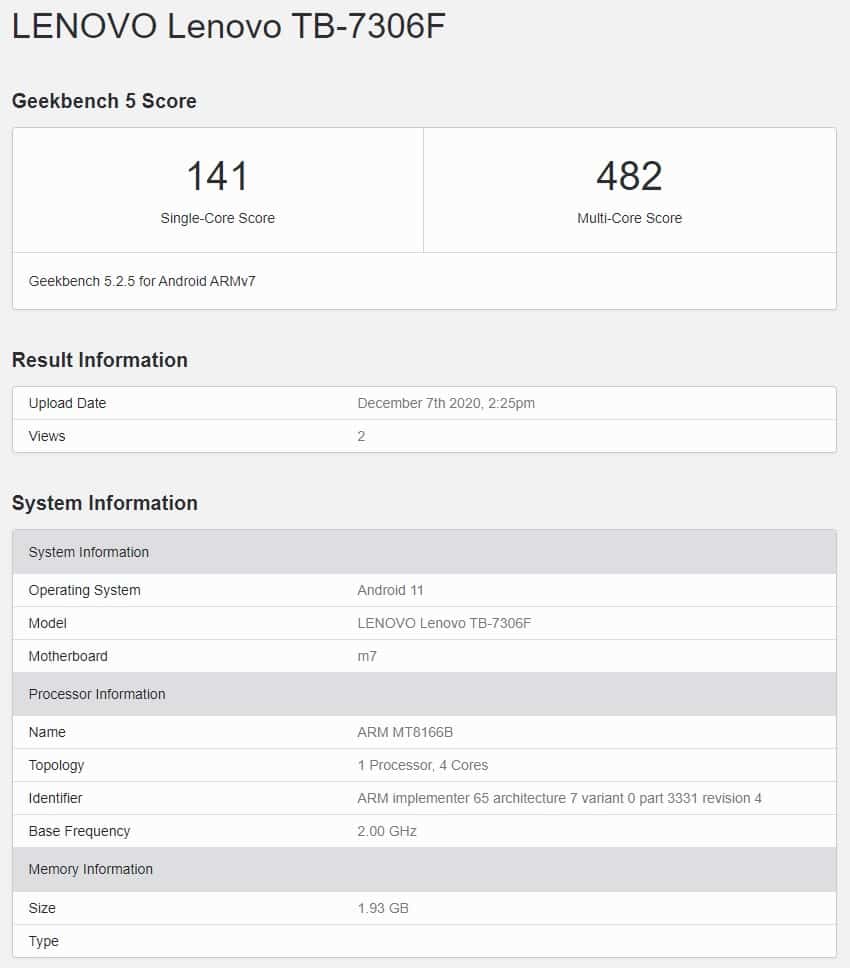 The Lenovo Tablet boasts a MediaTek MT8166B chipset. This is the codename for the Helio A22 Quad-Core with 4x Cortex-A53 cores clocked at 2.0GHz. Of course, anything running with a Quad-Core chipset in 2020 will have less than desirable performance. As expected the score obtained by this device has nothing to write about. The device has 141 points in the single-core test and 482 points in the multi-core department. The company is yet to make an official announcement about this device. We expect it to happen in the coming days, or even tomorrow as a surprise device at the Lenovo Lemon K12 series’ keynote.

Lenovo is one of the few companies that still invest in the Android segment. Well, despite the lack of a Tablet-focused experience in Android, there still demand this kind of product. According to a Canalys report, Lenovo is getting good results from its table and PC divisions. The company leads the global market with around 23.5 million shipments which include tablets, laptops, and desktops.