There is already official confirmation that the Xiaomi Mi 11 series will launch on December 28th. We still have about a week to the official launch thus there is still time for leaks. The latest leak regarding this series reveals its configuration and colour option. According to the leak, the Mi 11 (12GB+256GB) will have a Blue version. In addition, the 8GB+128GB, 12GB+256GB, and Special Edition will be available in Smoke Purple, Cigarette Purple, and White respectively. At least, we are now expecting Blue, Purple, and White colour options from the Xiaomi Mi 11 series. 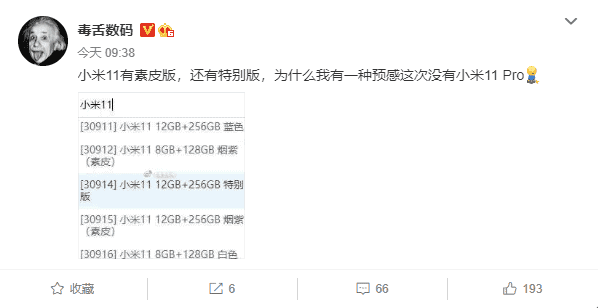 In addition, the leak also shows that these will not be the only colour options for this series. Also, there are reports that the Xiaomi Mi 11 will have a special leather edition. It is worth noting that at the press conference, Xiaomi may release only one Xiaomi Mi 11 model. The Pro model may arrive at a later date  (probably in mid-February).