Samsung Galaxy A72 4G variant with model number SM-A725F spotted on Geekbench listing. Some recent leaks suggest that Samsung is gearing up for the launch of three 5G ready smartphones that include Galaxy A32 5G, Galaxy A52 5G, and Galaxy A72 5G. Moreover, earlier there were also some reports that Samsung is going to launch 4G variants along with these 5G smartphones. 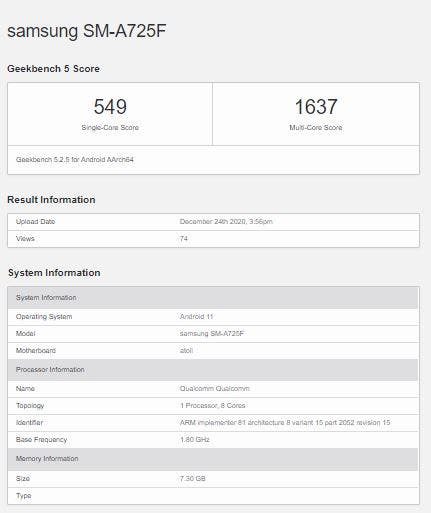 According to the Geekbench listing Samsung Galaxy A72 4G scores 549 points in single-core tests and 1637 points in multi-core tests. The smartphone is powered by a Qualcomm Snapdragon 720G SoC and Adreno 618 GPU. It pairs 8GB of RAM and runs on Android 11 along with Samsung One UI 3.0 out of the box. Recently, the camera setup of Galaxy A72 is also leaked online with a quad-camera setup. The camera setup of Galaxy A72 includes 64MP primary camera, 12MP ultrawide angle camera, 5 MP macro camera, 5MP depth sensor. Although, there is no information about the front camera yet.

Along with Galaxy A72, Samsung is gearing up for the launch of Galaxy A32 and A52. Samsung Galaxy A32 5G is powered by a Mediatek Dimensity 720 SoC that has 5G support. It will have a quad camera-setup that includes a 48MP primary wide-angle camera, an 8MP ultrawide camera, and 5MP macro and depth cameras. For selfies and video chats, there is a 20MP camera.

It is powered by a Qualcomm Snapdragon 750G 5G SoC and Adreno 619 GPU. The smartphone packs a quad-camera setup with a 48MP primary camera, 12MP ultra-wide camera, 5 MP macro, and depth cameras. On the front side, there is a 32MP camera for selfies and video chats.