We’ve been hearing about the impending disappearance of charging bricks in smartphones’ retail packages since the early day of 2020. However, the last nail in the coffin has been put by Apple with the release of the iPhone 12 series. Using the excuse of “avoiding electronic waste” the company ditched the included chargers of its iPhones. Now, if you don’t have one laying around you need to buy a separate charger from Apple Store. Many companies made fun of Apple on that occasion, and now, they’re following. Samsung was one that published videos to make fun of the situation, and not long after the iPhone 12 release, it seems that the Galaxy maker is going the same way. It’s controversial, but numerous reports suggest that the Galaxy S21 series will not come with a charger. At least not in all regions where it will go official.

Today, the popular tipster Ishan Agarwal voiced his belief that Samsung will indeed cut out the in-box accessories at least in the UK. The tweet has since been deleted. However, the folks at GSMArena managed to grab a screenshot.

The news comes straight after a certification listing from Brazil’s authority confirmed the Galaxy S21 series will be sold without a charger and headphones. We don’t have an official confirmation of all three Galaxy S21 phones will ship without in-box accessories, but that seems to be the case. A fun fact is that Samsung was caught deleting a Facebook post that mocked Apple for removing the charger with its iPhone 12 series. This is hilarious and at the same time quite controversial. Perhaps when the company mocked Apple, the decision of dropping the charger wasn’t been made yet. Perhaps, Samsung observed the sales of the iPhone 12 series and guessed that there’s no kind of boycott against the lack of a charging brick. 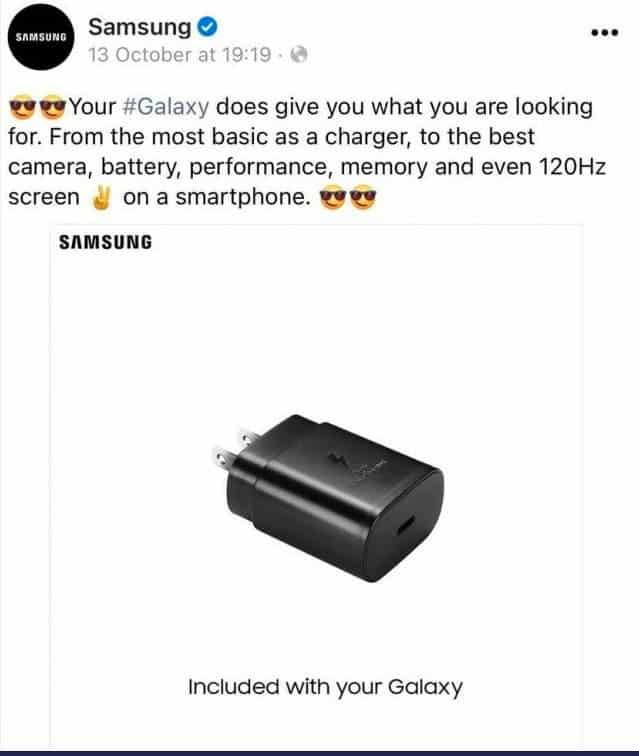 The Korean firm will be the second Android OEM to go this charger-less route. Xiaomi announced its Mi 11 in two distinct options – One with a charger brick and another one without the charger. Although Xiaomi has given users the option, it seems more likely to be a test. The company is studying the backlash from removing the charging brick. Xiaomi also mocked Apple and is taking the same route. Unfortunately, we don’t have many hopes and we see this as the beginning of an end for in-box chargers.

If a company is having success even removing the chargers, other companies will take the same route. Remember when smartphones came with earphones? The charging bricks are the new earphones.

Previous OnePlus to launch a $40 fitness band in 2021, will compete with Xiaomi