Indian gamers especially the PlayStation 5 fans can now be happy because this console is coming to them soon. After months of speculations and rumors, Sony India finally announced that the PlayStation 5 will arrive in India on February 2nd. In addition, the announcement also says that the pre-orders will begin on January 12th.  The Twitter post lists the official retail partners like Amazon, Flipkart, Croma, Reliance Digital, Games The Shop, Shop at Sony Center, Vijay Sales, and other select retailers. 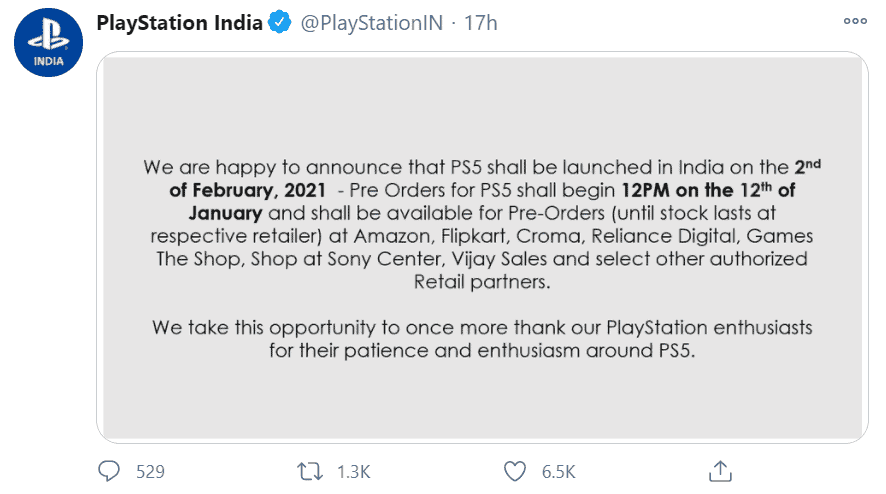 As we all know, Sony PlayStation 5 is a high demand commodity. Thus, in the first few weeks, the supply for this device will be very low. Recall that the first release of this device is November 12th. This means that the Indian launch is coming about three months late.

As for its price, the Hard Drive version will sell for Rs 49,990 while the Digital Version will retail for Rs 39,990. However, due to the high demand for this console, it will be very difficult to purchase the PS5 for the launch price. Many buyers may eventually purchase this device two or three times higher than the launch price. This is the case with the black market (non-official) pre-sale of this device. On Sony’s part, it is trying hard to discourage black market sales. According to Sony, all units purchased before the official release date and via unauthorized sellers will not have any warranty.

For the official retailers, all PS5 units will have a warranty for a period of 12 months. In India, this means that users will get a new unit if anything goes wrong within one year. However, there are terms and conditions to this warranty. In addition, its accessories like the DualSense controllers do not have any warranty.

In terms of other parameters, the Sony PlayStation 5 series has two versions – the optical drive and digital version. They come with AMD’s custom 8-core Zen 2 CPU 3.5GHz (supports frequency conversion). The graphics card is AMD’s custom GPU with RDNA2 architecture. The frequency is up to 2.23GHz, supports 10.28 trillion floating-point operations per second, supports 120Hz/8K output, 3D sound effects, etc., In addition, this console is directly backward compatible with PS4 games. PlayStation CEO, Jim Ryan, confirmed that 99% of PS4 games are playable on PS5. This device comes with 16GB GDDR6 of RAM. The memory bandwidth stands at 448GB/s and the internal storage sits at 825GB. However, the available storage for users is about 650GB.

Next The first HarmonyOS smartphone may not be Huawei P50